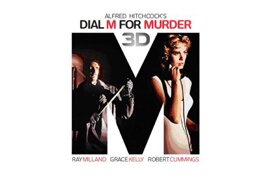 “This is not a conversion from 2D to 3D,” said Jeff Baker, EVP and GM of theatrical catalog for Warner. “The Warner library has the largest number of classic 3D titles (15) of any studio, and over the years we’ve been looking to release them. But not until now has the technology been perfected to the point we can do that.”

Dial M for Murder was originally shot using the same basic two-eye polarization process in wide use today, but the high cost of 3D exhibitions in the 1950s prevented many audiences from seeing it in its intended format.

Baker indicated a 3D Blu-ray version of the Vincent Price classic House of Wax is expected next.

Dial M stars Grace Kelly, Ray Milland and Robert Cummings in the story of a man’s plot to frame his adulterous wife for murder. The restoration includes a 4K scan, and the $35.99 Blu-ray includes the featurettes “Hitchcock and Dial M” and “3D: A Brief History.”

Warner Oct. 9 also releases a newly remastered Blu-ray of Hitchcock’s 1951 classic Strangers on a Train at $19.98. The film relates the story of two men conspiring to kill the person the other wants dead. Extras include a commentary by film historians plus several featurettes.