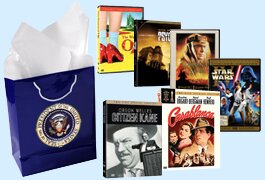 President Barack Obama caused an uproar in the British press when it was reported March 6 that visiting Prime Minister Gordon Brown received a set of classic DVD movies on his official visit to the White House during the week.

Visiting dignitaries often are fetted with state dinners and typically come bearing unique gifts, which in Brown’s case included an ornamental penholder made from the timbers of the Victorian anti-slave ship HMS Gannet, the first edition of the seven-volume biography of Winston Churchill by Sir Martin Gilbert and presents for Obama’s children.

No state dinner was given for Brown. However, the DVDs he was given — based on the American Film Institute’s 2007 top 25 movies — included Citizen Kane, Lawrence of Arabia, Star Wars, The Godfather, Casablanca, Psycho and The Wizard of Oz, among others.

The gift drew derision in London's dailies, including The Daily Mail, which considered it cheap and thoughtless. Questions arose whether the DVDs are playable in British players due to regional coding. The tabloid said Brown is not considered much of movie watcher, although there was no official reaction from the prime minister.

Conservative blogger Ed Morrissey said the DVDs could have been bought at “a deep discount” on Amazon.

“At least with a gift certificate, Brown could have picked out his own movies,” Morrissey wrote.