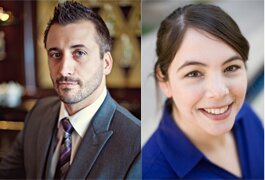 Gish previously served as VP of business development while Rosencrans served as a director.

“For the past decade, I’ve had the pleasure of working closely with wonderful clients who are constantly exploring innovative solutions to manage the complexities of the changing manner in which content is being consumed,” Gish said. “I am honored to take on these expanded duties and lead our remarkable Testronic U.S. team.”

Rosencrans will oversee all day-to-day operations of Testronic U.S., supervise the operations staff and manage technology implementations. She’s been with the company since 2004.

“Testronic has been fortunate to build the best team in the business, and Jason and Shana are at the very heart of it,” said Testronic CEO Mike McGarvey. “I am delighted to have Jason lead our U.S. offices, and I believe he will play a pivotal role in our continued success. Shana is an innovative thinker and diligent expert who has been instrumental to our ability to deliver the highest caliber work for the past decade.”