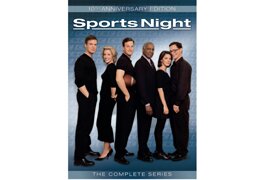 Shout! Factory is priming another cult-favorite TV series for a special-edition re-release. In the wake of its successful “My So-Called Life” DVD set last year, the indie distributor will release Sports Night: The Complete Series — 10th Anniversary Edition, a new eight-DVD collection of the Emmy-winning 1998-2000 comedy-drama series created by Aaron Sorkin (screenwriter of the recent Charlie Wilson's War). The set is slated to hit shelves Sept. 30 (prebook Sept. 2) at $69.99.

“The show got short shrift before, and we wanted to make it right,” said Lorrie Shapiro, VP of DVD production for Shout! Factory. “It's a great show many people may not remember, and it deserves to be seen.”

All 45 episodes of “Sports Night” previously were released on DVD by Disney in 2002, but without special features. The release was so low-key, Shapiro said, that one of the show's executive producers, frequent Sorkin collaborator Thomas Schlamme, told her he didn't realize a DVD version was already available.

“It's Aaron Sorkin's first show,” Shapiro said. “It's his first pairing with Tommy Schlamme. It was so heavily layered and ground-breaking in the way it combined comedy and drama.”

While the show quickly found a dedicated fan base, Shapiro said, its hybrid style may not have been fully embraced by ABC, which imposed a laugh track on early episodes and finally canceled the show after two seasons. Many of the real-life struggles with the network became storylines for the show within a show.

“In his commentary, Tommy talks about how they dialed down the laugh track in the first season, so it became less noticeable, and by the second season it was gone,” Shapiro said. “It didn't fit with Aaron's rhythm. The humor comes from these tangled conversations that are flawless on one level but very candid. These are characters who tell the truth.”

Unfortunately, Shapiro said, Shout! Factory was unable to remaster the audio to remove the laugh track.

Sorkin and Schlamme, who also directed several episodes, have recorded commentaries for the first and last episodes, and Shapiro is gathering new interviews with them and several cast members for a retrospective featurette. The set will include two DVDs of bonus material that is still being finalized but will likely have a gag reel and, if they can be found, deleted scenes. Also included will be a 10th anniversary booklet with material written by Sorkin.

Another extra Shapiro would like to add is a look at how the fictional “Sports Night” compares with the real “SportsCenter.”

“We'd show clips from the show to the real sportscasters and have them tell us how realistic it is,” Shapiro said.

Sorkin went on to do “The West Wing” and “Studio 60 on the Sunset Strip,” both of which explored similar themes to “Sports Night,” Shapiro notes.

“These are shows about a really smart group of people who are perfect at what they do, but their personal lives are flawed,” Shapiro said. “These are people who work hard and are so busy that they really form a kind of family. Their personal relationships take place within the work environment.”

Shout! Factory had worked with Disney on the new “My So-Called Life” set, which proved a hit with fans — the 2007 edition has already outsold BMG's bare-bones 2002 release, according to Nielsen Video-Scan data. So it wasn't a stretch for Disney to similarly grant a license for Shout! Factory to produce the “Sports Night” set, according to Shapiro.

“This was something we wanted to do,” Shapiro said. “Disney and ABC are giving us 100% support.”

Shapiro hopes the show's fans will appreciate the new DVD.

“People who found this show are so happy just to have it,” Shapiro said. “We're taking a chance on something that's been out before. But this version is so much more insightful. It really will put the show in its context.”