Digital Goes Over the Top 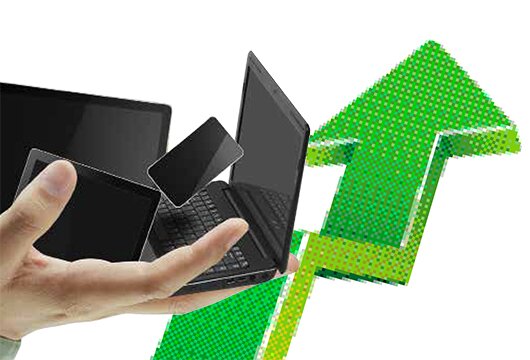 Future pundits may look back on this past year as the period when digital delivery went over the top, in more ways than one.

As far as content distribution is concerned, this happened in both the digital “rental” realm (via subscription services such as Netflix, Amazon Prime and Hulu) and the digital ownership realm.

Indeed, in the first quarter of 2015, a more than 20% increase in electronic sales and streaming nudged total consumer home entertainment spending upward by a fraction to $4.59 billion, up 0.23% from $4.58 billion in the comparable period of 2014, according to data from DEG: The Digital Entertainment Group.

The gains were due primarily to continued double-digit growth in subscription streaming, led by over-the-top (OTT) video services such as Netflix and Amazon Prime, as well as Digital HD, or electronic sellthrough (EST).

Consumer spending on Digital HD rose 22%, to an estimated $431 million in the first three months of this year compared with $352 million in the first quarter of 2014. It continued a trend that accelerated in 2014. For instance, the industry saw enormous growth in new-release digital purchases, which jumped more than 60% from 2013 to 2014, according to data from the DEG. As far as catalog digital purchases, the news is good as well. Digital catalog purchases grew more than 50% in the first quarter of 2015 compared with the same quarter of 2014, according to DEG data. UltraViolet, the cloud ownership service backed by most of the major studios, has attracted more than 22 million consumer accounts in 13 countries across three continents.

The revenue from digital purchases is approaching $2 billion domestically, say industry observers. Each digital purchase offers studios a significantly higher margin to content owners than a stream on a service such as Netflix, which is good news for studios looking to combat shrinking physical sales.

“It is becoming material enough now — as a much bigger, more lucrative margin category for us — that it’s offsetting the drop in the physical business,” said Ron Sanders, president of Warner Bros. Worldwide Home Entertainment Distribution.

Because content owners don’t incur the cost of producing discs for Digital HD, the margin is better even than DVD or Blu-ray sales, noted Sanders.

“We continue to be impressed with the growth of electronic sellthrough,” said Man Jit Singh, president of Sony Pictures Home Entertainment.

Key to the growth of digital purchases is early access to titles before disc release, becoming standard at the studios, as well as improved consumer interfaces on UltraViolet and retailer services, say studio executives. Disney also has its Disney Movies Anywhere cloud offering.

“We are dedicating an increasing amount of marketing muscle to the earlier Digital HD window,” said Bob Buchi, president of worldwide home media distribution for Paramount Home Media Distribution. “We’ve found that the platform exclusivity helps drive adoption that has led to increased EST sales each quarter. The additional benefit is that this strategy extends our promotional window and serves as early awareness for the physical consumer, who remains a vital part of business.”

Indeed, the physical disc business has been instrumental in growing digital sales.

“The digital business continues to experience double-digit growth, benefiting from the exceptionally strong, symbiotic relationship shared with physical,” said Eddie Cunningham, president of Universal Pictures Home Entertainment.  “Blu-ray combo packs in particular have clearly served as critical drivers in leading consumers to transact digitally. Likewise, our effort to aggressively develop a windowing strategy that advantages digital release dates has also fueled meaningful progress. Regardless of format, however, it is key to our success as an industry that we continue to ensure that our offerings benefit ownership to ensure that entertainment fans remain steadfastly engaged in our category.”

Indeed, in offering more digital purchase access, while maintaining a physical business, the industry is following consumers who are watching content in more ways and on more devices than ever.

“The media landscape is incredibly dynamic, and we have to morph constantly to react to those changes,” said Mike Dunn, worldwide president of 20th Century Fox Home Entertainment. “The digital business offers us endless opportunities to innovate and reach consumers across all their devices.”

On the “rental” side of the digital business — with digital streaming growth of 23% to $1.14 billion in the first quarter alone, according to the DEG — OTT was the buzzword for analysts and others talking about the cord-cutting population — the ever-increasing number of consumers, many of them young, who prefer to watch content online and on demand on the web rather than pay for cable or satellite. Many such consumers stream content on subscription video-on-demand services such as Netflix that are more economical than a cable bill. Many also draft off a family or acquaintance plan for which someone else has paid. A recent Parks Associates study that found that nearly 60% of U.S. broadband households use OTT video services, and that account sharing is prevalent.

After growing conflict with cablers that own the pipes into the home, OTT services got a boost when the Federal Communications Commission Feb. 26 gave a nod to net neutrality, a concept that maintains consumers must have equal access to content from various Internet sources, by voting to regulate the Internet similar to a utility. Also, Comcast April 24 shelved a much-anticipated merger with Time Warner Cable as the FCC seemed to be turning against consolidation among the companies that own those pipes that deliver Internet. Score one for Netflix and other web companies that deliver content via the pipes of others.

At the same time, the number of such services proliferated in the past year, with Dish Network’s Sling TV, CBS All Access, HBO Now, Shout! TV, PlayStation Vue and a kids’ offering from Nickelodeon called Noggin. OTT was off to the races both domestically and internationally as Netflix began to span the globe. Netflix CEO Reed Hastings, in a Jan. 20 investment letter, said the service planned to be in 200 countries, generating worldwide profitability, in two years.

Meanwhile, original programming also proliferated on Netflix, Amazon Prime and other services and attracted acclaim. Amazon Prime won two Golden Globes for its episodic original “Transparent” while Netflix’s “House of Cards” picked up a Globe for star Kevin Spacey. Amazon also joined Netflix in the production of movies, in addition to episodic programming, sending a bit of a shiver down the spine of theatrical exhibitors as they saw SVOD encroaching on their window.

“Nothing we’re doing is meant to be anti-theater or anti-cinema,” he said.

But like exhibitors, home entertainment executives also look to attract consumers to their higher-margin offerings, rather than Netflix.

“On Netflix there’s a certain return, but it is multiples higher in ownership,” said Warner’s Sanders.

“There’s been a lot of interested major retailers that have been coming into the ecosystem here and outside the U.S.,” Sanders said.

While Redbox Instant's and Target’s shuttering of their digital sales services was a blow, Walmart’s Vudu service, Best Buy’s CinemaNow service, Apple’s iTunes and Amazon Instant Video, along with cabler Comcast, are making digital ownership more available and attractive — and that makes studio executives confident that they can push profit in high-margin digital sales over the top.