Brisco County Jr. Rides Again at Comic-Con, and on DVD 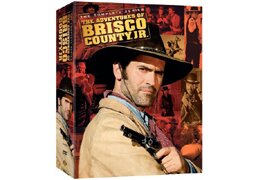 SAN DIEGO — For “The Adventures Brisco County Jr.” star Bruce Campbell and some of his fellow alumni from the 1993 cult show, it was all about the fans at Comic-Con.

Cuse attributed the fans' consistent barrage of queries and clamoring for the show to the studio with its recent release on DVD. And the set is sitting pretty at No. 2 on Amazon.com's best-seller list, the panel pointed out.

“It really was due to all you guys that it even came out,” Cuse said. “The studio's gone through several regime changes since the show was on the air. I have to thank Gord Lacey from TVshowsonDVD.com for really pushing them to release it.”

Campbell, with his trademark wit, responded to one fan in the audience who balked a bit at the $99 price tag for the set — pointing out the dearth of extra content on the recently released Jack of all Trades: The Complete Series DVD from Universal Studios Home Entertainment, another show Campbell fans were clamoring for over the years.

“Look, you can go get Jack of all Trades with jack s**t on it for $30,” he said. “But [the 'Brisco' set] shows that Warner Brothers respects you as DVD purchasers; they stepped up and did it right — once they finally caved and put it out, that is. They really did a good job; they didn't do a hack job on it.”

The audience took a look at one of the extras included on the disc, footage of Campbell reading from his book, If Chins Could Kill: Confessions of a B Movie Actor, and the section devoted to “Brisco.” On the DVD, the voiceover is all set to footage from the show.

Looking back at the comedy/western/sci-fi show, panelists said they all remembered having a lot of fun and being very tired by the end of it. "Brisco" shot 27 action-laden, horse-riding episodes in one TV season. Campbell said his disappointment at the show getting canceled was mitigated by a sense of relief that he would finally get some sleep.

The show was getting all kinds of notes from the [Fox] network suits, all the time, Cuse said, suggesting the writers tone down the sci-fi elements of the concept, boost the comedy, tone down the comedy, get into more emotional themes, go straight cowboy western.

The writers had to mark the notes they got down to the minute, to keep straight the newest directive, they were getting so many.

“I think we did a particularly good job of maintaining continuity with all the schizophrenic notes we were getting from the network.” Cuse said. “In truth, I think the first thing they should have done was change our time slot. We were on at 8 p.m. on Friday night, which is sort of a death slot — I mean people do still go bowling — few shows have succeeded in that slot.”

A big part of the fun was working on the Warner backlot where so many great Westerns where shot. “Brisco” had access to massive resources from Warners' classic westerns, said McNamara, which made writing the episodes very fun.

“I remember one of the last episodes we did, we were in the saddle for 12 hours, riding full out, and I did not want to go home that night,” star Carey recalled. “We were playing cowboys with the best toys and the whole experience was incredible.”

One fan asked Campbell what kind of training he had as an actor before really getting into the business.

He looked right at her, chewing gum and deadpanned: “I have no training whatsoever.”

The audience laughed and he continued: “At the end of the day you get all your training on a set like ‘Brisco' working 12 hours a day.”

“Then I started being a producer, basically to give myself parts,” he added cheekily.

Does Campbell, who's kind of a god of ‘B' movies and a huge fan favorite, mind that he's been typecast as a quick-witted, offbeat character player?

“Am I happy being typecast?” he said, with an ominous pause. “Very happy.”

“The truth is, I am drawn to a certain kind of show, like ‘Brisco,' it was not a normal show— so yeah, I may be typecast, but I really love all that crap.”
Bookmark it:
Add Comment