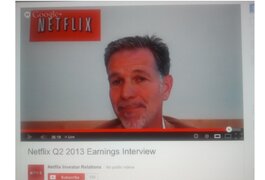 The Los Gatos, Calif.-based service added more than 1.2 million net streaming subscribers globally, including 630,000 in the United States and 610,000 internationally.

Shares were eroding even while Netflix CEO Reed Hastings was hosting the service’s first-ever live video earnings “interview” webcast in place of the traditional investor call.

The change in format resulted in considerable pre-event negativity from those who felt the format stifled direct access. Analysts emailed questions in advance to co-moderators Richard Greenfield, analyst with BTIG Research in New York, and CNBC media reporter Julia Boorstin, who each selected questions for Hastings, CFO David Wells and chief content officer Ted Sarandos — the latter making his first appearance on a financial call.

Considering the moderators' respective backgrounds as aggressive (and independent) analyst and journalist, concerns about softball questions were unfounded. In fact, it wasn't surprising Boorstin began the webcast asking Hastings about the change in format.

The CEO said the altered presentation was a work in progress and that investor concerns would be dealt with accordingly.

“We should process that after the interview, and let’s see if it’s useful and productive for investors and see what they think,” Hastings said.

Netflix no longer reports the contribution margin for disc rentals, which include hybrid disc/streaming subs — the service’s historically most lucrative members.

When asked if Netflix is atrophying its disc business with plans to shutter it, Hastings (again) said the service has millions of loyal subs with more content selection than any SVOD service.

“It’s got a value equation for over 7 million members and that will go on for a very long time,” Hastings said.

In a letter to shareholders, Hastings said the jump in Q2 domestic streaming subs was attributed in part to the revival of “Arrested Development,” the quirky former Fox comedy that garnered Netflix three of its 14 Emmy nominations.

“This show already had a strong brand and fan base, generating a small but noticeable bump in membership when we released it,” Hastings wrote.

Netflix, per policy, doesn’t disclose ratings for its original programs, citing the fact it doesn’t have to appease advertisers. It has also stopped disclosing churn, which equates to the percentage of subs who leave the service during a quarter.

Regardless, some analysts had expected a bigger bump in domestic subs from original programming.

"Their subscriber additions were underwhelming,” said Michael Pachter, research director at Wedbush Securities in Los Angeles. “They added 100,000 [domestic subs] year-over-year, not as much as expected, especially given [the hype} of ‘Arrested Development.’”

Hastings said the net additions from “Development” were not “tremendously significant” in the short term, adding that Netflix subscribers don’t join because of one show.

The executive said management’s hopes regarding new subs revolved around reaching the midrange of projections, which he said Netflix accomplished.

The CEO added that Netflix was still in the “early innings” of original content, and that if done right could turn into franchises becoming “incredible assets” for the company in future years.

“So, we’re really happy with the progress of the business; we’re happy that net adds were higher than a year ago,” he said.

Chief content officer Ted Sarandos, who took part in the live webcast, said for every original program launched on Netflix, the number of viewers and total hours viewed has grown sequentially.

“These [originals] are going to have very long-term implications, and … have a subtle impact on subscribers over time,” Sarandos said.

Hastings added that “Development” was a bit of an anomaly since it had a built-in audience from its days on Fox; thereby making it difficult to assess on new subscribers. He said investors should put more stock in originals such as House of Cards, Hemlock Grove and Orange is the New Black to determine the effect on subscriber additions.

The CEO said he would expect to see “a little bump” in the numbers for the second season of “Cards,” adding that by season four or five — hopefully — it had developed into a “Harry Potter-esc global phenomena” with subscribers asking about the next season.

“But we have to make season two as good as season two,” Hastings said.

“It would have to lead to believe that people are taking more confidence with idea of Netflix originals, which is creating some excitement for upcoming seasons as well,” he said. “The brand is starting mean something to viewers even though we only started with this in February.”

When asked, Sarandos (again) declined to reveal viewership totals for Netflix’s original programming, saying the comparisons to broadcast and cable shows was “apples to oranges.”

He said all of Netflix originals are drawing “TV size audiences,” adding that those obsessed with data should look to Netflix’s renewal of a second season of an original program as a “very positive sign” regarding viewership.

“If we are renewing programs people aren’t watching, then we are creating a huge opportunity cost in our content spend,” which Sarandos said would result in Netflix not having the money to spend on content subscribers do want to watch.

Hastings said Netflix’s is looking into owning outright original content, although he said the gradations of content ownership make it a work in progress. The SVOD service currently does not own any of its original programming, including “House of Cards.”

When asked if Netflix plans to raise debt (via stock sale) or subscription prices in the next 12 months to fund increasing content costs, Hastings said the service remains “very comfortable” with the $7.99 price point, adding he doesn’t envision raising debt levels anytime soon.

Hastings, in the letter, said the recent influx of funds (up $750 million) by Hulu’s owners likely portends a spike in content spending among SVOD services going forward — a prospect he said Netflix is more than ready to combat.

“Hulu has more money to spend, content prices may rise further, but we have many multi-year deals in place to mitigate this,” Hastings said.

The executive said Netflix would expand the originals initiative to include documentaries and stand-up comedy specials.

“We’ll continue to build on our initial success with originals as we gain confidence in our ability to use our judgment and data to find projects that our members enjoy,” Hastings wrote.

Finally, comments posted by viewers during the "interview" appeared generally positive to the format, suggesting that Netflix's decision to again change the television landscape marches on.