Netflix Gets Next-Day Access to ‘Breaking Bad’ Final Season in the U.K. 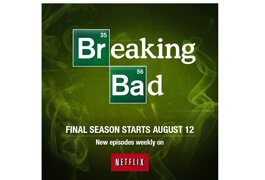 Netflix July 26 said it will make available final-season episodes to “Breaking Bad,” beginning Aug. 12 in the United Kingdom and Ireland — the day after they air in the U.S. on AMC Networks.

Due to the timing of the programming, Netflix will not make the entire season available for streaming at launch. And subscribers in North America, Scandinavia and Latin America will be out of luck.

“We are thrilled to be bringing the highly anticipated final season of ‘Breaking Bad’ to Netflix members in the U.K. and Ireland on a first-run basis,” Netflix chief content officer Ted Sarandos said in a statement. “‘Breaking Bad’ is a once-in-a-generation caliber of show and continues to be a huge success on Netflix.”

Netflix currently streams globally the first four seasons of the series, which garnered 13 nominations for the 2013 Primetime Emmy Awards to be held in September.

“Breaking Bad” creator Vince Gilligan said the agreement is appropriate since he believes Netflix has helped popularize the program internationally.

“Netflix has been instrumental in making ‘Breaking Bad’ the success that it is – particularly in the U.K. and Ireland, where it has built an audience and become a huge phenomenon,” Gilligan said. “I am delighted that fans there will be able to enjoy the end of [the show] on Netflix so soon after it airs in the U.S.”