Cinemax Ready to 'Strike Back' 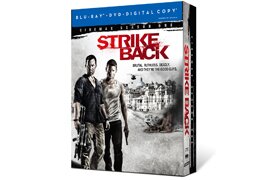 Unlike its parent company, HBO, cable network Cinemax isn’t known for its original programming. But it took steps to change that in 2011 in a partnership with British Sky Broadcasting to produce “Strike Back,” which delivered some of the network’s highest ratings in years.

The 10-episode series, a follow-up to a six-episode series that aired in Britain in 2010, is based on the novels of Chris Ryan and depicts the exploits of a British covert anti-terrorism unit aided by a former U.S. special forces operative. The show stars Philip Winchester, Sullivan Stapleton, Liam Cunningham, Amanda Mealing, Eve Birthistle, Jimi Mistry, Rhashan Stone and Richard Armitage.

Strike Back: Cinemax Season 1 arrives on DVD and Blu-ray Aug. 7 (order date July 3) from HBO Home Entertainment. The DVD is listed as a four-disc set at $49.98, with the Blu-ray a $59.96 combo pack containing four Blu-ray discs, two-DVD flipper discs and a digital copy with UltraViolet access. Both the DVD and Blu-ray include episode commentaries with the cast and executive producer Daniel Percival.