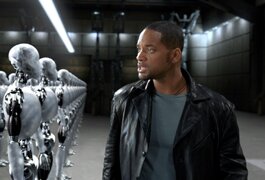 Twentieth Century Fox Home Entertainment said it is releasing sci-fi action movie I, Robot, starring Will Smith, on 3D Blu-ray later this year — the first in a series of legacy movies the studio plans to re-release in the high-definition format.

The announcement was made April 16 at the NAB confab in Las Vegas. I, Robot, which grossed nearly $350 million at the box office, earned an Oscar nomination in 2005 for best special effects. It was released May 24, 2005, in a two-disc DVD all-access collector's edition and on Blu-ray Disc March 11, 2008.

The studio is working with JVC Kenwood, which has developed a process that allows for the conversion of 2D movies to 3D at a third of the $50,000 to $70,000 per minute it costs to transfer a typical feature film to 3D. Specifically, the new process significantly reduces the amount of labor required to “rotoscope” each frame of a movie, according to Fox.

“The advances in 3D conversion technology developed by JVC has exceeded our most optimistic expectations,” Danny Kaye, EVP of global research and technology with 20th Century Fox Home Entertainment, said in a statement. “We look forward to bringing movies like the already visually stunning I, Robot to home on 3D Blu-ray.”