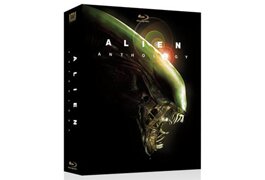 Oct. 26 (order date Sept. 22) 20th Century Fox Home Entertainment will street the Alien Anthology collection on Blu-ray Disc, featuring two versions of all four films, the original bonus materials for each film from every previous home video release (including laserdisc), and a MU-TH-UR interactive mode that pulls all 60 hours of bonus materials from all six discs into one index.

With a list price of $139.99, the set features more than 12,000 still images, new features including screen-tests of Sigourney Weaver, new deleted scenes, and the previously unseen cut of “Wreckage and Rage: The Making of Alien 3.”

For Alien, fans get the 1979 theatrical and 2003 director’s cut versions (with a Ridley Scott introduction), audio commentaries, theatrical and original isolated scores, and deleted and extended scenes.

For Aliens, both the 1986 theatrical and 1991 special edition version are included, the latter featuring an introduction by James Cameron. An audio commentary, deleted and extended scenes and theatrical and original isolated scores also are included.

Alien 3 will have both the 1992 theatrical and 2003 restored editions, an audio commentary, deleted and extended scenes, and theatrical and original isolated scores.

Alien Resurrection has both the 1997 theatrical and 2003 special editions of the film, the latter including an introduction by director Jean-Pierre Jeunet. Bonuses include a commentary, deleted and extended scenes, and a final theatrical isolated score.

Disc five of the set features the making-of for the anthology, which features a dozen hours of in-depth documentaries and additional five hours of “Enhancement Pods” created for the Blu-ray set. The pods offer behind-the-scenes footage and interview outtakes from all four films.

Fans attending San Diego Comic-Con International can preorder an exclusive limited edition of the set for $149.99, which features “The Guardian” — an exclusive illuminated statue sculpted by Sideshow Collectibles that “protects the precious disc cargo housed within.”