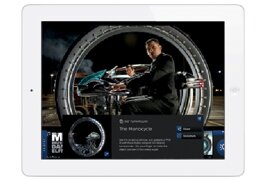 Home entertainment used to be so simple.

With VHS it was the movie. DVDs opened the door to commentaries, deleted scenes and any number of bonuses that could fit on a single (or dual-sided) disc. Then Blu-ray Disc made 1080p high-def and Internet connectivity to content commonplace.

But home entertainment isn’t as simple as a disc anymore. Consumers want more. And with content apps — for the computer, tablet and smartphone — the studios are realizing it.

“Obviously it’s a new technology, and we really felt going into it that consumers have these devices in the living room, smartphones and tablets, and they’re using them not only with television but with movies,” said Tracey Garvin, SVP of worldwide marketing for Sony Pictures Home Entertainment, which has released second-screen applications for both The Smurfs and The Amazing Spider-Man. “We wanted to figure out how to extend that on-disc experience and give a more interactive, immersive experience.”

The Smurfs application today is still being downloaded thousands of times a week, even though the Blu-ray Disc was released in December 2011, Garvin said.

“We’re coming up with Smurfs 2 soon, and we’ll re-launch that second-screen app with additional content, so it becomes a really great bridge strategy for a franchise title,” said Lexine Wong, senior EVP of worldwide marketing for SPHE.

The app includes activities, games and a trailer, and by the theatrical release in late July, Sony expects it will have been downloaded a million times.

Lori MacPherson, EVP of global product management for The Walt Disney Studios, said the studio has seen a direct, positive relationship between the second-screen apps and Blu-ray sales, with approximately 50% of respondents saying the apps played a part in them purchasing a title.

“Things like that are hard to quantify to the dollar or unit, but what we do know is that a lot of people say it’s positively influencing their decision to purchase,” she said.

Disney had the first second-screen application — Bambi — more than two years ago, and currently has the most among major studios. The latest one came with the theatrical release of Oz the Great and Powerful and, much like The Avengers before it, adds content up through the Blu-ray release. She said each second-screen app is better than the next, as Disney learns what people are using the apps for.

“It’s been somewhat of an evolution, and originally we knew through research and personal experience that people were watching their TVs with a connected device nearby,” MacPherson said. “Tablets had just come out in the market and were starting to take off, and we thought, ‘Wouldn’t it be amazing if we allowed people to legitimately use their tablets to get more supplemental information and experiences while they were watching the movie?’”

Some studio applications for home entertainment are obvious: Warner has made its Flixster-owned movie streaming and discovery service a go-to app for UltraViolet.

Sony’s Crackle app is a mainstay among ad-supported video services. And before “apps” was in the home entertainment lexicon, Universal’s pocketBLU Blu-ray Disc feature was a “second-screen” application … before the term became hip.

Yet day-to-day studio content applications have become extremely precise, accommodating (and anticipating) what consumers want with their entertainment. Starting before theatrical and past street date for disc, studios have used apps to keep consumers constantly engaged with content these past couple years:

■ Warner: In February 2011, the studio launched app-based versions of Inception and The Dark Knight, offering a few minutes of each theatrical release along with bonuses (trivia, games, soundboards, etc.), enticing app users to either stream or download versions of the films. In 2012 Warner went all out with second-screen applications for disc, first with Happy Feet Two, second with Sherlock Holmes: A Game of Shadows, and most recently with The Dark Knight Rises (the last building on an app available in conjunction with the theatrical release).

■ Paramount: In early January, the studio debuted a Star Trek Into Darkness application — a full five months before the film debuts in theaters May 17. That’s just a recent example: Paramount was among the first major studios to launch film-driven applications, starting with the Paranormal Activity iPhone app in late 2009. Using apps the studio went on to successfully promote a title (Foursquare-driven Transformers: Dark of the Moon) and its own heritage (“Paramount Pictures 100 Years of Movie Magic App” for the iPad).

■ Fox: In March 2012, 20th Century Fox Home Entertainment offered an application to let consumers “stop, scan and shop” for movies — spotlighting Alvin and the Chipmunks: Chipwrecked — using mobile devices at shopping centers, encouraging users to scan a physical display and purchase content from the studio. Along with the September 2011 Blu-ray release of the “Star Wars” saga, the studio offered an application that opened up early access to the set’s bonus features. More recently, Fox credited its second-screen app for high Blu-ray Disc sales for the October 2012 release of Prometheus.

■ Sony Pictures: The studio offered up a smartphone app for the theatrical release of The Amazing Spider-Man in July, long before the studio debuted a tablet-only app for the disc release last November. And in late 2012, Sony offered an application for Men in Black 3 with the iPad in mind, allowing for the film to be downloaded for offline playback, or streamed using a Wi-Fi connection (along with more bonus features than offered on disc).
And if you’re a Monty Python fan, you could download “The Holy Book of Days,” an interactive iPad app tied into the March 6, 2012, Blu-ray release of Monty Python and the Holy Grail.

■ Disney: In July, Marvel Studios and Walt Disney Studios Home Entertainment put out an involved second-screen application for The Avengers, two months before the September Blu-ray Disc street date. Disney was at it long before that, debuting a free studio-driven app in 2009 that offered Disney characters, music, video and games.

■ Universal: The studio has put out a few second-screen applications, including ones for Fast Five and Cowboys and Aliens, and its pocketBLU app works with a slew of Blu-ray titles, including everything from Snow White and the Huntsman and Jaws to Sixteen Candles and Smokey and the Bandit.

These studio applications are just the beginning, according to Bhanu Srikanth, CEO and co-founder of Jargon Technologies. To date, Jargon has provided multiplatform second-screen technology for applications from Fox, Warner, Sony Pictures and others.

Srikanth sees a bright future for studio apps, socially and economically, but only as long as the powers that be are careful not to turn “consumers away from this second-screen engagement.”

And the second screen — the home entertainment application that the industry and consumers alike seem attracted to today — is worth paying attention to, she said.

“The second-screen app has the unique capability of tying in these scattered pieces of [value-added material] with the main feature as well as personalizing it for each user,” Srikanth said. “That is pretty powerful.”

“Viewers don’t want to constantly push buttons on their iPad or smartphone to engage in a second-screen experience; it’s too distracting,” he said. “They should be able to set the second-screen device down on a table or next to them on the couch and let the app trigger interactive content at key moments in the program.”

Gracenote — which develops audio and video watermarking technology that can identify what TV viewers are watching in real time — considers a consumer second-screen experience a priority, White said.

“The more time and effort put into developing a unique experience that helps engage viewers, the more likely viewers will use the app again,” he said. “A common mistake we see from broadcasters is treating the second screen as a place to dump content that has nothing to do with what’s happening on screen.

“When developing content for a second-screen app, broadcasters and advertisers should focus on being a part of the story, rather than interrupting it.”

Tom Woods, VP of user experience for metadata leader Rovi Corp., said home entertainment applications — second-screen or otherwise — are going to revolve around e-commerce, whether consumers can get what they want, when then want it.

“E-commerce is going to be huge,” he said. “In the future we’re going to see the ability for purchases for everything from clothing to furniture, while the show is going on.”

“[What Fox was] looking for was an opportunity to reach out to their fans, those who have a somewhat aspirational relationship with the characters, members of a biker gang who tread on the line between being good and bad,” he said. “If you want to get a hoodie or a leather vest, and dress like your favorite character, you can do that without joining an actual biker gang.”

Via Magic Ruby’s application, Fox had more “SOA” in-episode purchases and “a much higher instance of returning customers than any other platform,” Brooks said.

“That is an extremely powerful mechanism, and it proves the model of synchronized commerce,” he said.

Fox is taking it further, announcing in late February it would make programming available on Fox Now apps synchronized to broadcast, allowing viewers of Fox shows to experience real-time, second-screen involvement with content.

“For consumers, this means the second-screen experience is more authentic and more a part of the show itself, as opposed to being a marketing ‘add-on,’” said Zane Vella, CEO of Watchwith, which contracted with Fox for the second-screen service. “While the specific types of content varies from show to show, it is all what the industry calls time-based … in other words, authored on a scene-by-scene basis to a program-length timeline that syncs up with the show itself.”

“Developing rich and interactive content to run alongside programming takes time, and there can be technical hurdles,” he said. “We believe that second-screen applications are an important part of the entertainment experience because they offer better discovery, control and immersion into the content they care about.”

Shawn Patrick, co-founder of yap.TV, whose technology pairs TV viewing and social media for the second screen, said some apps have worked better than others, and some companies are going to stick around for the long haul, while others will fall behind.

Jason George, CEO of Telescope.tv, a second-screen development company, seconded that opinion: “There’s a lot left to be worked out, to see who the winners and losers are going to be.”