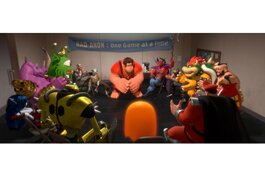 For the first time Walt Disney Studios Home Entertainment is debuting a new-release title on digital before disc, releasing Wreck-It Ralph on high-def digital and digital 3D Feb. 12, before the March 5 disc release.

Wreck-It Ralph, which features the voice talents of John C. Reilly, Sarah Silverman and Jack McBrayer, follows the chaos that ensues when video game bad guy Ralph decides to try and be a hero in his arcade. The film took in $177 million at the domestic box office.

The high-def and standard-definition digital versions of the film, along with the four-disc and two-disc Blu-ray Disc combo packs, include the bonuses “Bit by Bit: Creating the Worlds of Wreck-It Ralph,” alternate and deleted scenes, video game commercials and Paperman (the animated short that played in theaters before the film). Blu-ray exclusives include “Disney Intermission: The Gamer’s Guide to Wreck-It Ralph,” which gives viewers an in-depth tour of the film when it’s paused.