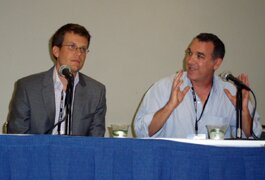 ANAHEIM, Calif. — Larry Shapiro, head of talent for online branding company Fullscreen, can tell you Hollywood is paying more and more attention to online video creators. The millions of subscribers and hundreds of millions of video plays his company’s clients generate are hard to ignore, after all.

“We want our creators to build their audience online, and then we go to the studios, TV networks, game companies [to] create formats [to monetize content],” he said, speaking during a panel at the annual VidCon conference.

20th Century Fox and NBC are among the media companies that have worked with Fullscreen to leverage online video for major shows and movies.

With the right content, the right branding and a sizeable audience, “You can go to Fox, you can go to ABC, and say, ‘Here’s the person who’s going to create the next “Glee.” Look at the online engagement,’” Shapiro said.

It’s doesn’t happen all the time, but YouTube has been the birthplace for several stars. Justin Bieber and Greyson Chance got their starts on YouTube, as did the guys behind Comedy Central’s “Workaholics.”

“What studio executives pay attention to … is when the online community starts talking,” Shapiro said.

Hollywood isn’t deaf when it comes to what online video communities have to say … and neither should the creators of the online videos themselves.

“It has to be community driven to work,” said John Green, a bestselling novelist (“Looking for Alaska,” “Paper Towns”) and popular video blogger. “Creators are so protective of our communities, whether it’s 20 [subscribers] or 20 million. It’s all we have.”

You don’t have to have Hollywood in your sights to become satisfied — and profitable — with your online work, according to Christopher Sharpe, producer and digital content strategist for SharpeFocus.tv, which produces YouTube-based cooking shows.

“Your audience lets you know what’s working,” he said.

Dan Rose, chief marketing officer for Mike Chang Fitness, which produces online fitness videos and products, said online video producers must be careful with their audience, using his own work online as an example: “You don’t want a Taco Bell ad [popping] up during a workout video,” he quipped.

Green said he makes less than 10% of his revenue from his online channel off advertising, promoting his novels there.

“We know that advertising can be a reliable source of revenue, but there are other [sources],” said Suzanne Szostak, head of brand engagement programs for YouTube, the main sponsor of VidCon.

Shapiro sees a future where online video producers will have their own apparel lines available in major retail stores, instead of selling a couple here and there online.

“All of our channels are focused on selling one product, and we actually buy huge amounts of advertising,” Rose said.

VidCon attracted approximately 11,000 attendees, all focused on the world of online video, to the Anaheim Convention Center. The event featured industry panels, performances, concerts, parties and an exhibit hall.

“VidCon is about the community that makes up the online video industry, from content creators and technology providers to marketers and consumers,” said Hank Green, creator and co-founder of VidCon. “Online video is having a significant impact on the majority of the world’s population, and it is continuing to grow as a form of entertainment that is rivaling or, in many instances, surpassing the reach of television and movies.”

Online research firm comScore estimates that in December 2012 there were 182 million Americans who watched a combined 38.7 billion online videos.