Blu-ray Producers: Extras Are for the Fans, By Fans 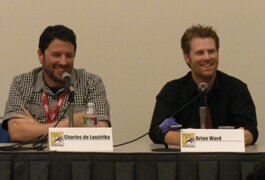 SAN DIEGO — A common theme that emerged from the 2010 DVD/Blu-ray Producers Panel at San Diego Comic-Con International was that to appease movie fans who appreciate bonus material the most, it helps for those making the extras to be fans themselves.

“I’ve been lucky to work on stuff I grew up on,” said Brian Ward, who produces extras for Shout! Factory titles such as Max Headroom: The Complete Series (on DVD Aug. 10) and the recent “Transformers” and “G.I. Joe” animated collections. “But if I’m not a fan of something I have to remember there are still fans of it out there, so you have to make the extras special for them.”

“I’m really excited about working on extras,” said Javier Soto, who previewed DVD extras for Robert Rodriguez’s Predators. “It’s observational filmmaking that really gives you access to the directors. We have the opportunity now to expand the world of the movie.”

Soto said Predators will include a motion comic prequel about the characters in the film. He also showed off a featurette to The Devil’s Backbone that he said connects it to Guillermo del Toro Pan’s Labyrinth, describing the two films as brother productions.

When asked whether studios are neglecting DVD in favor of Blu-ray, Cliff Stephenson said there is “definitely a slant toward Blu-ray.”

“This Maximum Movie Mode you see for the most part can be done on DVD,” Stephenson said. “Maybe without the picture-in-picture stuff.”

Stephenson showed off a behind-the-scenes clip for the July 27 release of an extended cut of Sylvester Stallone’s Rambo, which he said is being released only on Blu-ray with nine minutes of new footage.

Stephenson’s anecdote of the genesis of the project helped explain that not all double dips are attempts by the studio to get more money from hardcore fans.

“We were like a week from finishing the Rambo Blu-ray when I got the call that Stallone wanted to do a director’s cut,” Stephenson said. “They asked how we do it. I said we don’t. We could wait six months to put the disc out, or we could finish what we had and then tie a director’s cut release to The Expendables.”

For the record, Stephenson said The Expendables Blu-ray will include the director’s cut the first time it comes out.

Charles de Lauzirika announced that Ridley Scott’s Robin Hood would be released with the theatrical cut and a 20-minute longer director’s cut in the same package.

He previewed a behind-the-scenes documentary by showing Scott in the editing room debating editing techniques.

“When you have a relationship with the director, you get access you typically wouldn’t get,” de Lauzirika said, adding that Target will have an exclusive bonus disc for the film.

He also plugged another title that is getting a lot of attention at Comic-Con this year: Fox’s Alien Anthology Blu-ray (due Oct. 26; a booth on the show floor let fans crawl into the hybernation chamber of the Nostromo, the ship from the first film). Among the hours of new extras, de Lauzirika said, was a behind-the-scenes documentary called “Wreckage and Rape: The Making of Alien 3” that was rejected by the studio for an earlier DVD.

“But they didn’t cut anything,” he said.

The panel agreed that all filmmakers must consider the Blu-ray presentation when making a movie, even indies.

“You don’t have a choice, really,” de Lauzirika said. “You have to entice people on the fence about getting your movie by offering those extras.”

Added Soto: “When you are producing the film you have to think that the end result will be in the HD format. Three or four years ago the studios said everything had to be in HD. It kills me that the Hellboy 2 doc was shot in HD, but they put it on the disc in standard-def.”

Ultimately, however, the panel agreed that the extras are just that. Extra.

“We can create incredible content, but it’s the movie of the TV show that’s going to sell it,” Soto said. “At the end of the day, I have to be proud of whatever I do.”

“I came to Los Angeles to be a filmmaker,” said Brian Ward. “But I love my job making these bonus features. I’m still trying to be a filmmaker, but if that doesn’t work out I’m fine doing this. When I came to work at Shout! Factory, I had a wish list of five titles I wanted to work on. With ‘Max Headroom,’ I did all five.”

Ward announced that Shout! Factory’s next “Mystery Science Theater 3000” set, Vol. 19, will be released in November and contains the films Robot Monster, Bride of the Monster, Devil Doll and Devil Fish, plus a Gypsy robot figurine.

Another topic that came up was the prospect of the industry going digital, which would limit how many times a studio could sell a movie. Moderator Bill Hunt of TheDigitalBits.com asked the audience if they liked digital or packaged media, and the overwhelming response was that those in attendance preferred owning discs.

“It’s a room and a panel of collectors,” Hunt said.

In other news from the first day of Comic-Con, Tron Legacy producer Sean Bailey said plans are underway for a Blu-ray upgrade of the original Tron, and that Tron Legacy may be released in 3D on Blu-ray. The film was shot using the same kind of 3D cameras used for Avatar.