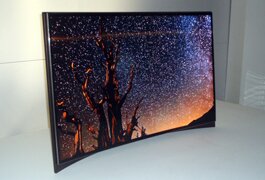 Both Samsung and LG debuted 55-inch curved OLED sets at the 2013 CES.

The industry revenues pulled in an estimated $204 billion in 2012, up 5% year-over-year, according to CEA president and CEO Gary Shapiro.

The Montreal-based company announced at CES that it had signed on Vizio as the first HDTV company to carry 3DGO!, an app-based, dedicated, 3D transactional VOD service that will offer new-release 3D movies from three major studios for $6.99, and catalog titles for $1 less.

“In the last years, Vizio has been our No. 1 partner in the CE market and it was totally natural to launch our new and exciting 3DGO! VOD service with them,” said Nicholas Routhier, Sensio president and CEO. “With their current install-base of smart 3DTVs in the US and impressive connectivity rate, Vizio offers 3DGO! an incredible platform to reach a critical mass of 3D enthusiasts ready to enjoy high-quality 3D VOD.”

Sensio said it is in the final days of closing its studio agreements, and will have 40 3D titles available at launch, offering Blu-ray-quality 3D streams. It’s the first dedicated 3D VOD with no subscription or additional equipment required.

“We are always on the lookout for new innovative apps to complement our smart-TV lineup and 3DGO!certainly fits this description” said Matthew McRae, VP of products at Vizio. “3DGO! represents the perfect combination of connectivity and 3D, two areas we are committed to. For years, we’ve been supporters of the high-quality Sensio Hi-Fi 3D format and of Sensio’s continued efforts to bringing a user-friendly 3D consumer experience.”

Sensio promises the station will work regardless of passive or active-shutter 3D sets, and aims to sign on as many studios and 3DTV companies as possible.

It’s a battle between the curviest.

Samsung Electronics and LG Electronics spent the first days of CES trying to one-up each other, first with 4K sets then with curved OLED.

“LG is the first to launch the 55-inch OLED TV,” said Havis Kwon, president and CEO of LG’s Home Entertainment Company. “We believe our new OLED TVs offer the ultimate viewing experience, surpassing anything seen before. The new curved model complements our core OLED TV family with a unique design that capitalizes on the thinness of the screen and the aesthetic beauty of OLED TV.”

Not to be outdone, Samsung’s set, also 55 inches, boasts the same visuals.

“Samsung is dedicated to developing innovation television solutions, beyond what consumers could ever expect, or could even imagine,” said H.S. Kim, EVP of Samsung’s visual display business. “We will continue our tradition of developing Samsung TV innovations by steadily introducing new TV technology that helps enhance the lives of users, even beyond the world’s first curved OLED TV.”

Samsung did not disclose a price for its set, while LG has its listed for just over $10,000 … if you live in South Korea.

The annual reception by DEG: The Digital Entertainment Group is the top event for the home entertainment industry at CES. And in 2013 it was the No. 1 event for Walmart.

In the past, DEG has handed out three retailer awards at CES: digital, hardware and software. In 2013, Walmart swept all three, in overwhelming fashion, a first for the awards.

“They’re the front lines of what we do,” said Ron Sanders, president of Warner Home Video and the of the DEG board of directors, going on to praise Walmart’s “gusto and innovation.”

John Aden, EVP of general merchandise for Walmart, accepted the awards, thanking the studio home entertainment presidents for their work in helping Walmart be the first to introduce disc-to-digital, which allows consumers to unlock digital versions of their DVDs and Blu-ray Discs.

“I think for the industry, certainly for us, that was a big, bold move,” Aden said. “Entertainment is important to our customers’ lives, and will continue to be important to us because of that.”

All this talk of 4K has the Blu-ray Disc Association (BDA) excited.

While Blu-ray doesn’t currently have a 4K specification, the announcement by Sony at CES that it would release several Blu-rays sourced from original 4K masters (for upscaling on 4K sets) could be the start of something great.

“What they announced some substance on the overall impact on quality,” said Andy Parsons, SVP of corporate communications for Pioneer Electronics and chair of the BDA’s promotion committee in the United States. “It’ll be interesting to see how this goes.”

The BDA was on hand at CES to remind everyone what’s tops when it comes to home entertainment. Shows that are available on streaming services may not be there permanently. Purely digital files can’t deliver the reliable, continues 48 mbps for audio and video. And Blu-ray Discs are tangible.

“Blu-ray gives the consumer control,” Parsons said. “It gives you the most broad range of options to watch with combo packs, from UltraViolet to digital copy to DVD to high-def. It’s at the heart of content.”

And now that more than 3D Blu-ray Discs have hit the market, Parsons is looking at the format as being No. 1 for home entertainment for another 6 1/2 years.

No, it’s not a competitor with UltraViolet. It’s a complement.

That’s the word on Next Generation Secure Memory (NGSM) from Victor Matsuda, spokesperson for NGSM.

Established just over a year ago by Panasonic, Sony, Toshiba and Samsung, NGSM is another bridge between packaged media and digital, bridging disc content to mobile devices via flash memory cards, such as SD Cards. The content protection technology would allow for high-def video to be moved across devices using flash-based memory, and it would be done with enough content protection assurances to get content owners and consumer electronics companies on board.

Licensing opportunities for NGSM will be made available in the next few months, Matsuda said.

“It’s a huge opportunity to take the living-room HD experience mobile,” he said at CES. “The linkage usage WiFi and USB is limited to standard-definition. This would be a compliment to UltraViolet, co-existing securely.”

Dolby Labs is excited about more than one thing, and whether consumers should be excited depends on if they’re more into 3D or UltraViolet.

First, Dolby Digital Plus audio will be encoded on thousands of movies and TV episodes from Sony, Universal, and Warner in the UltraViolet Common File Format (CFF), once the CFF launches later this year. CFF will allow UltraViolet owners to move or copy a video downloaded between UltraViolet CFF-compatible media player apps and hardware devices

“The movies and television shows from Sony Pictures, Universal Pictures, and Warner Bros. are legendary," said Ron Geller, VP of worldwide content relations for Dolby. “Dolby is proud to serve as their trusted partner for UltraViolet CFF and apply our nearly 50 years of audio and video innovation to help ensure that the quality of the UltraViolet-enabled entertainment experience exceeds every consumer expectation."

Next, Dolby has one of the more impressive autostereoscopic (glasses-free) 3DTV solutions shown at CES. The solution optimizes content for specific devices and screen sizes, and promises it can enable viewers to decide how much depth the 3D affect relays.

“Unlike the other [autostereoscopic] displays I’ve seen, it doesn’t matter where the viewer sits,” said Dolby spokeswoman Grace Qaquandah.

Dolby promises that the solution will let broadcasters deliver glasses-free 3D content without worrying about ongoing improvements in 3D content and displays.

DTS may have had the most impressive — and unintentionally funny — presentation at CES.

In a closed theater the sound technology company showed off its DTS Headphone:X, which offers a virtual surround sound experience (up to 11.1 channels) via headphones.

After hearing the presentation without headphones, attendees were asked to put the headphones on and listen again. Imagine: You’re an onlooker in a dead quiet room, watching 20 people repeatedly taking their headphones off and putting them back on, several times, with increasingly bewildered looks on their faces.

It’s an ultimate home theater experience in headphones, in a solution that can be incorporated into consumer electronics products.

“As you can imagine, there’s a lot of interest,” said Alan Cohen, VP of marketing for DTS. “We’re still talking with a lot of partners. It’s a rich experience for the consumer, and that’s where we always start.”

“It's unlike anything I’ve ever heard before,” he said. “You can virtually put yourself into any listening environment and hear all surround sound audio cues coming from their intended direction in space over a standard pair of headphones. It’s like having a home theater in your pocket.”

For all these 4K announcements, Rovi Corp. has the consumer electronics companies covered on the codec side.

Rollout of the 4K solution is expected early in 2013, and the company is tying in its DivX video technology to the solution.

“As with H.264, Rovi will release core video encoding and decoding solutions that will be the foundation of a successful HEVC rollout and enable our customers to save money while enhancing the quality of the video services they offer,” said Matt Milne, EVP of worldwide sales and marketing for Rovi Corp. “We see HEVC as a huge step, enabling the industry to cost effectively transition more content to high definition formats and, eventually, 4K.”

Avni Rambhia, analyst for Frost & Sullivan’s Digital Media Practice, said HEVC can be important for allowing compression “to keep pace as resolution and quality demands on video rise and the sheer volume of channels and video available increases.”

“However the speed of uptake of the format and the rate at which it is able to transform the industry with its benefits depends heavily on the timely delivery of encoding SDKs for content creation, as well as technologies to streamline CE and mobile device support,” Rambhia said. “Early innovation by key solution providers such as Rovi will play a critical role in driving earliest possible adoption and demand across all target verticals and on all target devices.”

Also at CES, Rovi debuted a new second-screen feature, which allows for quick pushing of content between devices.