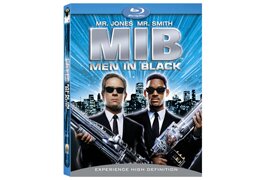 Not every movie deserves the Blu-ray treatment. I watched The Other Boleyn Girl in high-definition and, while the picture was great, it didn’t add anything to the film, which was far inferior to the excellent Showtime series, “The Tudors,” which I enjoy in HD.

But Men in Black is exactly the type of movie for which Blu-ray was made. With the perfect pairing of Will Smith and Tommy Lee Jones, there’s plenty of depth beyond the hilarious CGI effects — which seem to look less dated on Blu-ray than on DVD.

This 1080p transfer (on a BD-50 dual-layered disc) is a huge visual improvement over even the previous Super Bit DVD release. MIB has superb sound — especially evident is a rear channel surround presence that brings the film to life.

But it’s the extras on this MIB Blu-ray that really shine.

“Intergalactic pursuit: The MIB Multiplayer Trivia Game” is the first BD Live online game, and can accomodate up to eight players. Given Sony’s PlayStation pedigree, this first effort is very solid. For those who aren’t up on MIB trivia, I suggest the new BD-J (Java) pop-up trivia track, which will definitely help when playing the trivia game.

There’s also a new “Ask Frank the Pug!” feature. If you like Frank, you’ll love this feature. It’s not an interactive game as much as it’s like a Blu-ray version of  the old Magic 8 Ball.

Since Sony has released multiple versions of MIB on DVD over the past 11 years, some of the additional extras might not be on your original disc. One feature that really stood out on the MIB Blu-ray was the Enhanced Telestrator Commentary, which combines onscreen graphics with audio from director Barry Sonnenfeld and actor Tommy Lee Jones (who appear on screen as black silhouettes similar to the old “Mystery Science Theater 3000” TV series).

Of course, this BD comes packed with the standard alternate and extended scenes, technical commentary from Rick Baker and ILM, a scene editing workshop, behind-the-scenes featurettes and storyboard comparisons. All in all, it’s an excellent, definitive package.