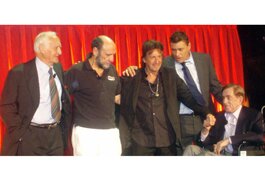 LOS ANGELES — “What would happen if this movie opened next week?” Al Pacino asked.

He may have been smiling when he said it, but he certainly wasn’t asking in jest. Nearly 30 years after Scarface first unglued audiences and movie critics alike, the iconic actor posed that question at an Aug. 23 party for the Blu-ray Disc release of the film.

When it was first released, critics largely objected to Scarface, openly offended by its hard-core violence and graphic language. Today? It’s a gangster film mentioned in the same breath as The Godfather and Goodfellas. “Say hello to my little friend!” Most any American male can easily parrot that quote to you, even if they don’t qualify to watch Scarface and its ‘R’ rating.

“We didn’t have the feeling it was going to be lasting, and it’s pretty amazing,” Pacino said. “As time went on, it just stayed there, and had this constant rebirth. It’s a miracle, really. There’s something in it that defies things, that’s controversial in its nature.

“It happens sometimes [with a film]. You get lucky,” he added.

It may still remain controversial to some in 2011, but the Brian De Palma (director) and Oliver Stone (screenplay) epic has been nothing but solid gold for Universal Studios Home Entertainment, according to president Craig Kornblau. He said the studio has sold 6 million DVD copies of Scarface to date. And the Sept. 6 Blu-ray release ($34.98), with its pristine picture and slew of new bonus features, shouldn’t disappoint either.

“It’s one of our most special titles, and there are few films in our catalog that attract this type of consumer attention,” Kornblau said.

Celebrities love it too: when Universal approached rap icon Ludacris about performing for this Scarface event, he didn’t hesitate to say yes. “It’s that kind of movie,” Kornblau said, smiling.

Every one of them admitted they are forever tied to Scarface, yet none of them sounded more happy for the film’s success than Bauer.

“I think that says something, [that there are no Scarface sequals]," he said. "I think the reason is, who would want to try and match this?”

Bregman — who Pacino credits for discovering him — worked with the actor on Sea of Love, Serpico, Dog Day Afternoon, and Carlito's Way. Yet it’s Scarface that Pacino should be most proud of, Bregman said.

“[Scarface] would be successful now,” he said. “It’s a perfect, perfect movie.”

On top of it all, Pacino said he remains surprised that two strong-willed, one-of-a-kind filmmakers, De Palma and Stone, managed to collaborate so effectively on a film like Scarface.

“This merging of the two of them I think was really the key,” he said. “I expected them to clash. And they didn’t. The marriage of Brian De Palma and Oliver Stone.”

‘Scarface’ Bonus to Air in Theaters

Say Hello to the 'Scarface' Game