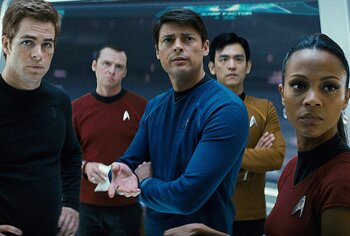 Best Buy earned DEG’s National Retailer of the Year awards for both hardware and software, as voted by DEG members.

HH Gregg Appliances and Electronics, a specialty retailer with locations in eight states in the Midwest and Southeast, was named Regional Retailer of the Year for hardware.

DEG’s Creative Excellence Award Winners for 2009, honoring the top DVD and Blu-ray Disc releases as chosen by a panel of reviewers and industry reporters, took on a decidedly otherworldly flair.

On the hardware side, the DEG Emiel N. Petrone Digital Innovation Awards, named in memory of the DEG’s founding chairman and chosen by a panel of product reviewers, acknowledge outstanding digital entertainment products released during the year in the sight, source and sound categories. The Sight award went to Pioneer for the Elite Kuro PRO-141FD HDTV; Source went to LG for the BD390 Blu-ray Disc Player; and Sound went to Marantz for the SR6004 A/V Receiver.