Fox’s Taken 3 may as well have been the only notable new release as far as the retailers were concerned April 21, which might be why the weekly ad circulars were more focused on selling catalog titles and promoting preorders for future hits.

While Taken 3 didn’t come with any retail exclusives, Best Buy did push its Blu-ray preorder for Warner’s American Sniper by offering exclusive bonus content when the title arrives May 19.

Target is offering a $5 gift card with preorders for Cinderella, The SpongeBob Movie: Sponge Out of Water and Paddington at Target.com/preorder. 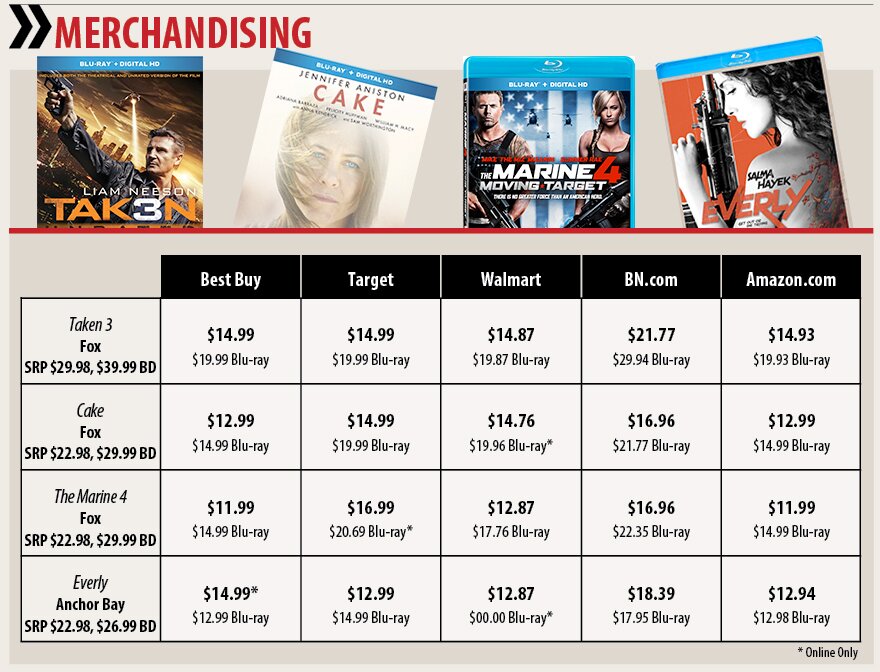 However, the pattern usually associated with exclusives surrounding the DC titles changed slightly. First, Warner offered a wide-release version of a Blu-ray gift pack with a character figurine, usually reserved for a Best Buy exclusive. As a result, Best Buy spruced up its version of the gift pack, offering a Digital HD copy of Batman: Under the Red Hood and a digital comic book of Batman #1.

Target offered the Blu-ray combo pack in a steelbook case, while Walmart, which usually offers a DVD special edition of such titles, had no exclusive.

Target also touted preorders for American Sniper at , offering a Blu-ray steelbook case and a guarantee for guests to pay a lower price if the cost drops before the title is released. 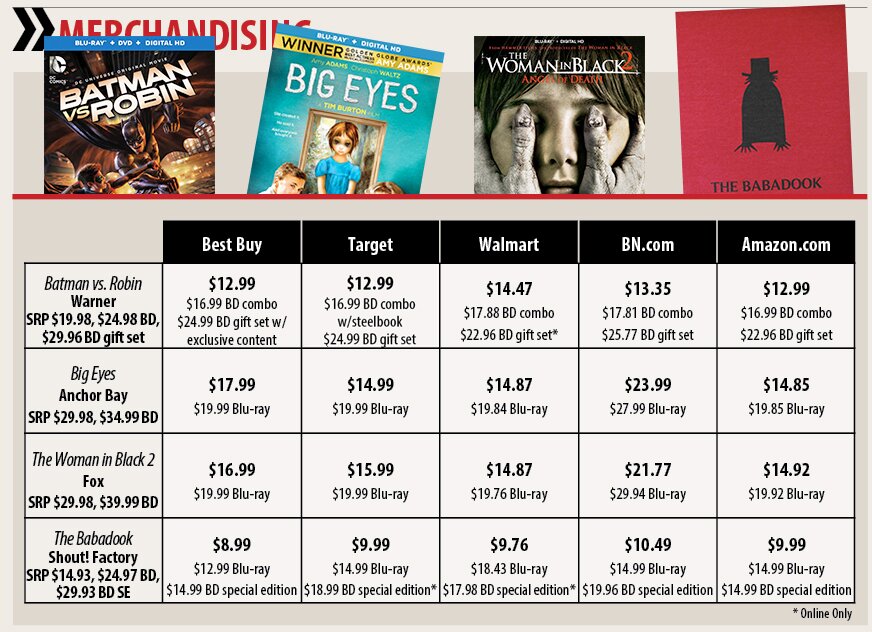 Retailers Blast Off With 'Interstellar' Exclusives

The only March 31 release with any notable exclusive promotion at the major retail chains was Paramount’s Interstellar.

New Blu-ray copies of the film at all locations included a special collectible Imax film cel containing a scene from the film.

Target March 17 had exclusive availability of the Blu-ray version of Disney's animated sequel 101 Dalmatians II: Patch's London Adventure. The 2003 film was a direct-to-video follow-up to the 1961 animated classic, and the new Blu-ray is timed as a companion to the "Diamond Edition" release of the original film earlier this year. The London Adventure Blu-ray was advertised in Target's weekly ad circular for $17.99 and upon its release was available only in stores and not listed on Target's website.

Among the other new releases, DreamWorks Animation’s Penguins of Madagascar received the most attention. All the retailers sold the special packaging configurations with wind-up penguin toys, though only Walmart varied the price.

Best Buy offered a $7.99 Penguins lunchbox, though lowered the price to $4.99 when purchased at the same time as a Penguins disc.

Target offered the Blu-ray combo pack with the exclusive featurette “Are You Smarter Than a Penguin?”

Sony Pictures’ Blu-ray of the Annie remake at Target came with a bonus disc of exclusive extras, plus a $5 savings when the Annie movie was bought at the same time as the soundtrack CD. Target’s version of the soundtrack contained two exclusive songs.

Best Buy touted a Facebook coupon with a $5 savings off the Annie Blu-ray.

Walmart offered the Annie Blu-ray with a plush toy of the dog Sandy. 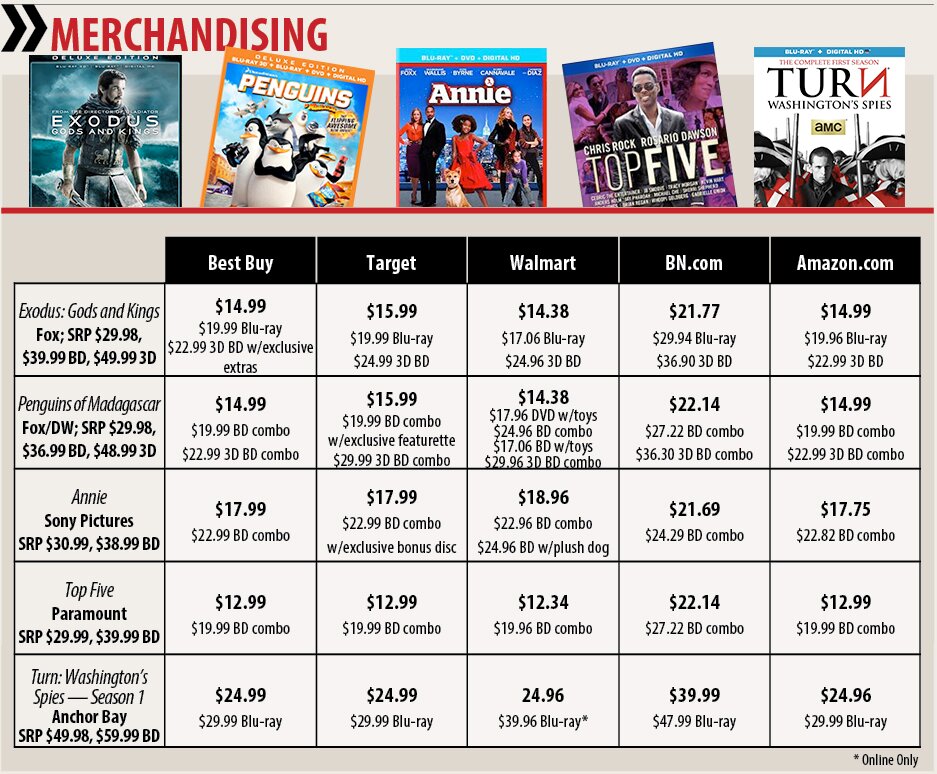 The huge Friday, March 6, rollout of Lionsgate’s The Hunger Games: Mockingjay — Part 1 carried over to overwhelm some of the March 10 new releases.

Best Buy offered the film in a steelbook case, while Walmart offered a slimmed-down Blu-ray edition with special box art, no DVD version and minimal extras.

For the March 10 titles, a couple new kidvid titles drew the most promotional interest. Walmart offered a DVD gift set of Fox’s “Air Bud” spinoff Russell Madness with a doggie plush, while Target offered a $5 discount when Warner’s The Flintstones and WWE: Stone Age Smackdown! was purchased with a 6-inch WWE action figure (priced at $9.99).

Best Buy has an exclusive window on the Blu-ray edition of Image Entertainment’s Wolfcop, which will be available elsewhere May 12.

Walmart had an exclusive version of the two-disc Blu-ray of The Sound of Music: 50th Anniversary Edition with a booklet, as well as a Peppa Pig: Muddy Puddles gift set with a plush toy.

Barbie, 'NeverBeast' a Snack for 'Mockingjay'

Walmart offered a special gift pack of Disney's Tinker Bell and the Legend of the NeverBeast Blu-ray with a Make Music With Bleu DVD, which instructs kids on how to make musical instruments from everyday objects.

For Universal's Barbie in Princess Power, Target offered a free mini pal with purchase of the movie or the Super Sparkle doll (priced at $18). Walmart offered the movie with a downloadable party pack.

Universal also offered a packaging variant for Princess Power, including a superhero mask inside specially marked copies of the DVD and Blu-ray.

However, the biggest title touted by the weekly ad circulars was the Friday release of Lionsgate's The Hunger Games: Mockingjay — Part 1. Best Buy offered the film in a steelbook case, while Target offered 45 minutes of exclusive bonus content and a booklet.

Sizing Up a 'Big Hero'

When it comes to retail exclusives, animated fare and superhero movies are usually the best bet, and Disney’s Big Hero 6 just happens to be both.

Among the Big Hero 6 exclusives available upon its disc debut Feb. 24, Walmart  offered a deluxe gift set of the Blu-ray combo pack with a “Science of Big Hero 6” bonus DVD.

Target offered Big Hero 6 in a steelbook case, plus a $5 savings on toys based on the film.

Best Buy had the film with exclusive lenticular box art.

The Disney store had offered preorders of Big Hero 6 with speical lithograph giveaways.

Among other films, Walmart stocked a DVD two-pack of the “Horrible Bosses” films upon the release of the second movie, while Best Buy offered a $7 savings with the purchase of both films on Blu-ray.

Target offered the final season of “Sons of Anarchy” on disc with exclusive box art and previous seasons for $14.99 each. Best Buy offered $10 off the seventh season with the purchase of any previous season on disc. 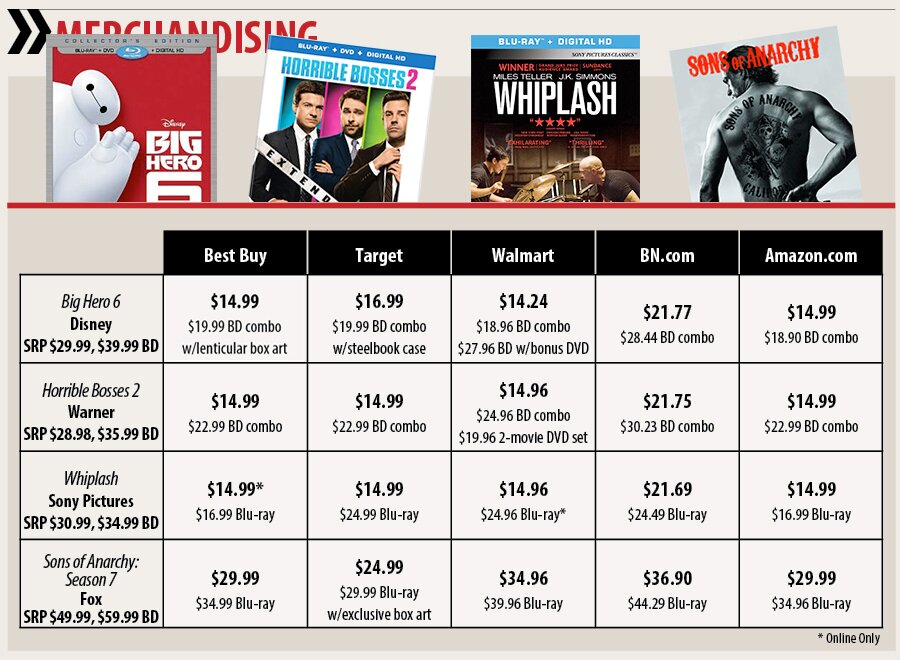 The Dog Days of February

While the regular Walmart price for 101 Dalmatians is $22.96 for the Blu-ray and $2 more for the gift pack at $24.96, the first week both were offered for $18.96, meaning the bonus DVD was essentially free with purchase.

Best Buy set its focus on preorders, offering 100 My Best Buy points for preorders of select titles, with exclusives such as a steelbook for Lionsgate’s The Hunger Games: Mockingjay — Part 1 and Warner’s The Hobbit: The Battle of the Five Armies, and a lenticular cover for Disney’s Big Hero 6.

For Game of Thrones: Season Four, Best Buy will offer five exclusive covers, including an online exclusive. Details are at .
Target touted a $5 coupon off the purcase of music, books or movies totally $25 or more. 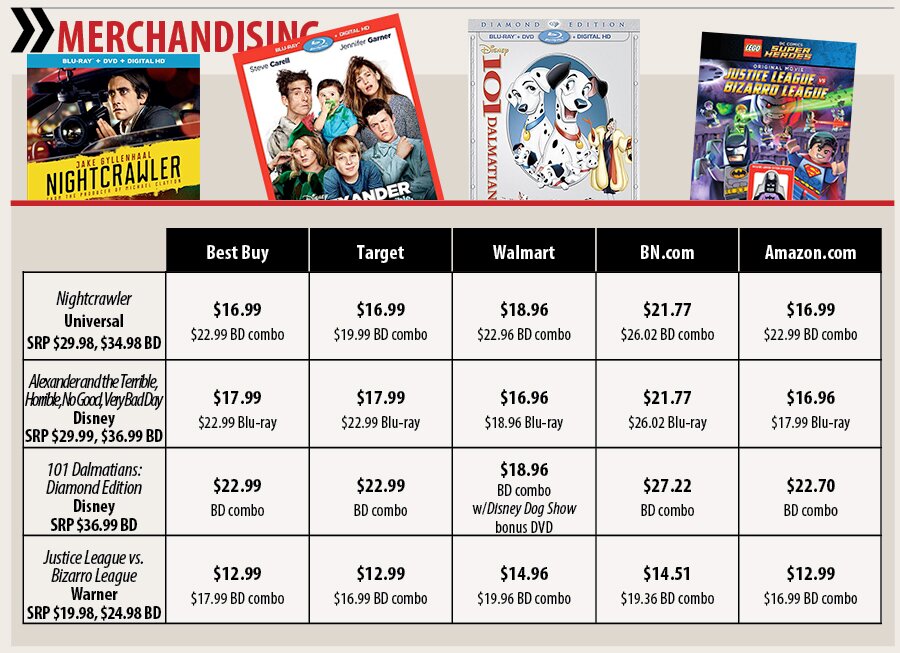 The 'Best' of 'Untold' Exclusives

Fox’s home video release of the latest romantic drama based on a Nicholas Sparks novel, The Best of Me, inspired a few retail exclusives.

Target offered the Blu-ray of The Best of Me with a bonus disc containing a half-hour of additional behind-the-scenes featurettes, while Walmart paired the DVD in a two-pack with another Sparks movie, Safe Haven.

The only other notable exclusive on a Feb. 3 new release was Walmart’s steelbook Blu-ray edition of Dracula Untold.

Among other promotions, Best Buy offered a limited-edition minion hat for $1.99 with the purchase of a select title for $9.99 each.

In addition, Best Buy offered a $10 gift card with the purchase of two select TV seasons, and triple My Best Buy membership points on any movie purchase. 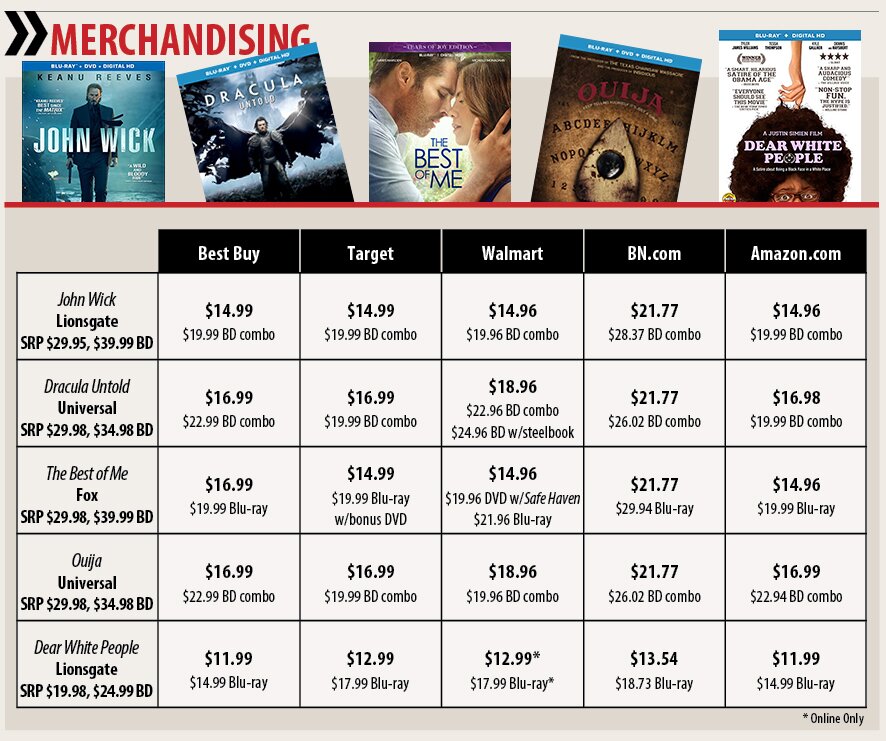 Best Buy offered a Blu-ray edition of Throne of Atlantis with a pack-on Aquaman figurine. Target offered the film with a steelbook case, while Walmart had an exclusive early window on a Throne of Atlantis two-DVD special edition.

For PBS’s Downton Abbey: Season 5, Target offered the disc with an exclusive “Music of Downton” CD. 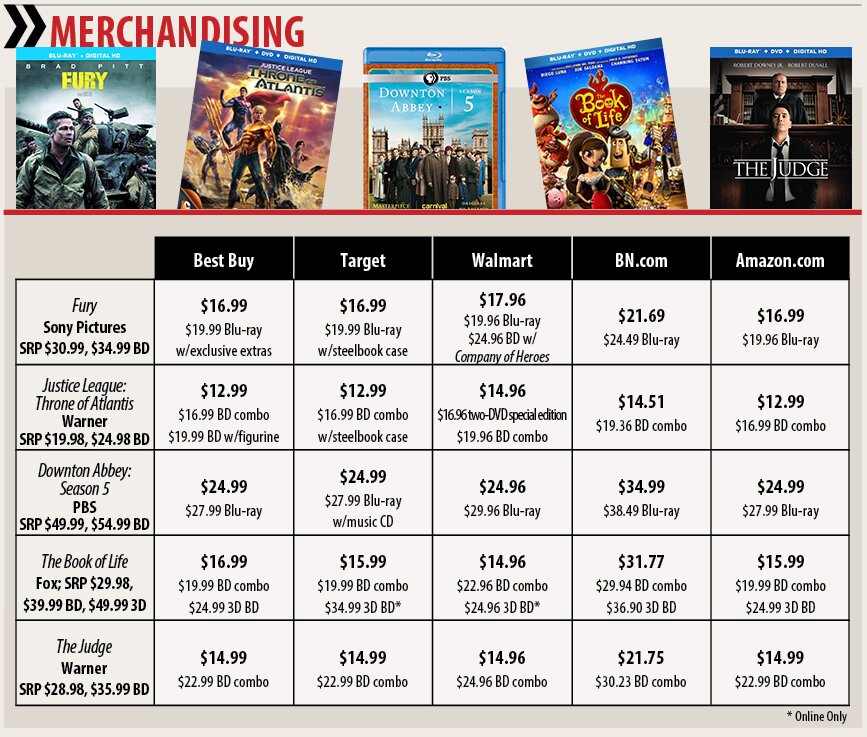