KISS Joins Scooby-Doo for a 'Rock and Roll Mystery' 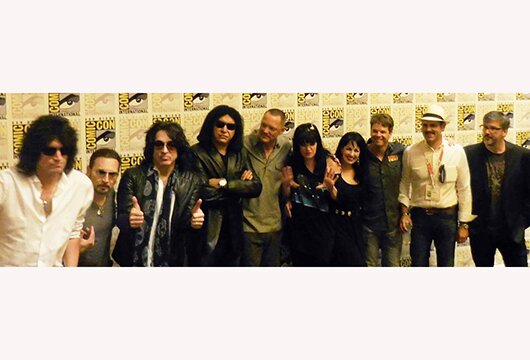 SAN DIEGO — Two beloved icons from the 1970s have come together in what seems like a natural collaboration for a movie.

Legendary rock band KISS has joined Scooby-Doo and the rest of the Mystery Inc. gang for a rockin’ mystery-solving adventure in Warner Bros. Home Entertainment’s Scooby-Doo! and KISS: Rock and Roll Mystery.

“The idea of two iconic entities, sharing the same space, makes for something very exciting and combustible,” KISS's Paul Stanley said at the 2015 San Diego Comic-Con International July 9. “The Scooby universe has never changed, any more than the KISS universe has changed. What’s changed is these two worlds collided.”

“Hanna-Barbera’s long relationship with KISS goes back decades,” KISS's Gene Simmons said. “In the ’70s, in ’78, we did KISS Meets the Phantom [of the Park], a theatrical movie. Then we appeared on “Scooby” in the ’70s.”

Hearkening back to each of these icons’ origins, director and producer Tony Cervone said this new movie was made to look like it was created in the late ’70s, pushing the color palette more toward earlier “Scooby-Doo” cartoons. Yet, the new film presents an original story while bringing together what makes each brand so popular.

“We get to do classic Scooby-Doo romps but do KISS songs,” Cervone said.

“[Scooby-Doo! and KISS: Rock and Roll Mystery] really breaks the mold and is a tour de force because what you’ve got is rock ‘n’ roll, Scooby stuff throughout, there’s a mystery in it … space, monsters, sci-fi, witches, all the cool stuff that fan boys love,” Simmons said.

Bringing Scooby-Doo together with KISS seemed like a natural pairing not only for the creators of the movie but for the voice cast as well.

“For some reason, oddly, it just made sense to me,” Lillard said.

And Kevin Shinick, who wrote the movie, said both appeal to all ages, even after all these decades later.

“KISS is still so relevant,” said Shinick, who is a KISS fan himself. “When I went to this concert, there were people my age in makeup. There were kids in makeup. … It does reach the masses. The reach that they have really does cross generations. Scooby-Doo has remained relevant all these years, and these guys have too.

“They change with the times, but they don’t change who they are.”

Cervone said that he and fellow producer-director Spike Brandt are also KISS fans.

“And we wanted to make sure that this movie at the end of the day feels like it was made by KISS fans,” Cervone said.

According KISS’s Eric Singer, the writers and animators nailed it when getting KISS down.

“They got it,” Singer said. “[They] got the real gist of the individual characters.”

Warner releases the full-length animated movie Scooby-Doo! and KISS: Rock and Roll Mystery July 21 as a Blu-ray combo pack with UltraViolet ($24.98) and DVD ($19.98). The film is already available for digital download. Bonus materials on the release include bonus Scooby-Doo episodes and featurettes.

“If this goes well, we would love to make another one,” Cervone said. “We’ve got great ideas for another one. We’re ready.”