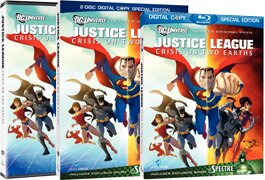 From “Sliders” to “Star Trek,” parallel realities are often ripe opportunities for creative, fun storytelling. The plot device is a natural for comic books, giving readers a glimpse of how their favorite fantasy worlds may have turned out if the heroes were the villains, and vice versa.

In Crisis on Two Earths, the Justice League is recruited by a good Lex Luthor from an alternate reality to fight the Crime Syndicate, whose leaders are alternate versions of familiar characters such as Batman, Superman, Flash, Green Lantern and Wonder Woman.

The setup will not be unfamiliar to fans to DC comics. In fact, an episode of “Batman: The Brave and the Bold” covered similar ground last year. The good guys show up and learn the bad guys have a device that threatens both worlds, leading to a final battle to decide the fate of reality itself.

Crisis skillfully arranges all the players so they each get to fight their counterparts from the alternate reality. It even milks a few laughs from the old gag about Aquaman being an essentially useless superhero out of water.

It’s a great piece of entertainment, but I felt surprisingly underwhelmed. The animation is lively and the fight sequences will raise the gander of many a fanboy, almost to the detriment of the story. Sometimes I wish the creators wouldn’t constrain themselves to 80 minutes and instead take the opportunity to tell an epic tale, instead of the usual framework for more fights that aren't too different from what we've seen elsewhere.

The story was inspired by the DC Comics adventures that frequently would send the characters to alternate realities. Occasionally this multiverse would serve as the backdrop for expansive crossovers that would forever change the course of comics history … until the next big storyline would invariably reset everything. This vicious cycle is the subject of the primary featurette on the disc “DCU: The New World.”

As usual, the disc includes episodes from the “Justice League” cartoon series, and promos for other DC Universe movies, such as the upcoming Batman: Under the Red Hood adaptation. There’s also an 11-minute short cartoon about the vengeful Spectre that gets a bit gory as he seeks justice against a gang of killers.

Among the more intriguing items I appreciated most on the Blu-ray are two live-action pilots based on DC characters. One is the “Wonder Woman” pilot from 1975 starring Linda Carter. The other is the 2006 “Aquaman” pilot from the producers of “Smallville,” which until now had only been available online and as a Best Buy DVD exclusive.