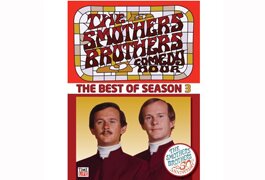 With the third season of the 1960s series “The Smothers Brothers Comedy Hour” now on DVD from Time Life, the famous comedy team is celebrating its 50th year in show business.

Dick Smothers, whose dramatic role as a corrupt politician in director Martin Scorsese’s Casino just came out on Blu-ray Disc from Universal, was the straight man to his older brother, Tommy.

Still angry after all these years, Tommy is candid in discussing how CBS, the most conservative of the three networks at the time, gave him creative producing control and regretted it as each week he used it to protest the Vietnam War.

HM: Why put the third season on DVD first?

TS: I think that was our best season, and we got fired after that. Looking back I was probably my own worst enemy and hurt the show by showing America a part of the counter-culture each week. But for every non-network guest we had, such as Jonathan Winters or Jackie Mason, we had one with our show business idols, such as Jack Benny, Bob Newhart and George Burns.

HM: In what condition were the original tapes?

TS: Surprisingly very good. We had great sound technicians, which is one of the many reasons the top pop and rock acts did our show. Look at the DVD and you’ll see The Doors, Donovan, Judy Collins, Joan Baez, Harry Belafonte, Ray Charles and the West Coast company of the legendary play Hair all performing live in prime-time. George Harrison even came on the show to encourage us to keep up our good work. The Beatles allowed us to debut a special live performance of “Hey Jude” and “Revolution,” which I’m convinced every teenager in America saw that evening.

HM: What did you and Dick think as you taped separate introductions and closing bits for each episode?

TS: I was amazed CBS didn’t try to have us killed, and Dick was amazed we lasted that long because he thought we were rarely as good as our guests. (laughs)

After “Saturday Night Live” and “The Daily Show,” our satire may seem tame or lame, but I believe we pioneered the way for shows like that. Whenever the network would give us grief and censor something from the show, I’d call the media the next day and tell them about it. In retrospect, that hurt the show in the long run, but it increased our audience and made our staff proud.

HM: You must have been proud when the show won an Emmy for your writers after it had been canceled.

TS: One of the things I’m most proud of was that most of our writing staff was under 30 and getting their first job in show business. Some of our writers were Rob Reiner, Steve Martin, John Hartford, who wrote the classic song, “Gentle on My Mind,” and Carl Gottlieb, who co-wrote Jaws and The Jerk. We even ran comedian Pat Paulsen for president, and one of the special features from the four-disc DVD set is rare footage of him playfully interacting with Sen. Robert F. Kennedy during the 1968 presidential campaign.

HM: What is the legacy of your show?

TS: For one hour each week, people of all ages could learn something about our great society, hear some great musicians singing live — not lip-synching — and have a lot of laughs. At times I think my brother was right. The two of us might have been the least interesting performers on the show!