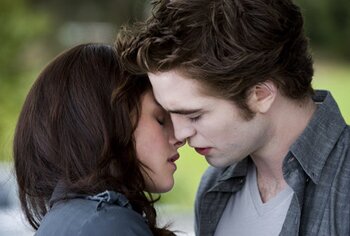 The movie, which ranked No. 4 among the top box office hits in 2009 with nearly $294 million in ticket sales in the United States and $410 million internationally, is expected to be one of the top packaged-media releases in 2010.

Target, which is offering discounts for pre-orders online, will offer a three-disc DVD for $26.99 (from $36.99 SRP) and two-disc Blu-ray ($29.99) deluxe editions with never-before-seen material, including interviews with Kristen Stewart, Robert Pattinson and Taylor Lautner; exclusive cover art; and a bonus film cell.

The special edition Blu-ray and DVD editions contain more than 70 minutes of special material, including feature-length commentary with director Chris Weitz and editor Peter Lambert; a six-part documentary showcasing “Life After Twilight”; “Chris Weitz takes the helm”; “The Subtle Details”; “Time to Shine”; “Tricks of the Trade”; “Ready for the World”; band rehearsal footage with Muse; and music videos from Death Cab for Cutie, Anya Marina and Mute Math.

The third installment in the “Twilight” series, The Twilight Saga: Eclipse, hits theaters this summer.