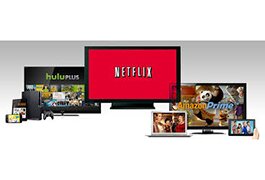 Yet, a recent report by Deloitte Touche Tohmatsu Limited in the United Kingdom implies that while Netflix’s market trajectory continues to expand, the impact of the SVOD leader, together with rivals Amazon Prime Instant Video and Hulu Plus, on the pay-TV ecosystem remains minimal.

In 2014, Netflix and Hulu are expected to generate about $5 billion collectively in revenue — or about 75% of $6.9 billion in global SVOD revenue. Note: While Hulu Plus has slightly more than 10% of Netflix’s subscribers, it generates the bulk of revenue from advertising.

In fact, Deloitte contends SVOD will remain in the near future as complementary to the traditional bundled pay-tv market. By the end of 2014, it believes 50 million households globally — including 5 million in Europe — will subscribe to conventional pay-TV and one or more SVOD services.

“This is not an aggressive forecast,” Paul Lee, head of research, technology, media and telecommunications at Deloitte Touche Tohmatsu Limited wrote. “Over the eight years that SVOD services have been available in the United States, the number of U.S. homes with pay-TV has increased.”

Meanwhile, the report says the growth in SVOD has spawned thousands of competitors — many regional and others via large multichannel video distributors such as BSkyB in the U.K., Pro-Sieben in Germany and HBO and Showtime in the U.S.

“Over the next few years, standalone SVOD players will have to compete not only with SVOD offerings from existing broadcasters, but also with enhanced VOD from pay-TV operators and terrestrial broadcasters,” Deloitte said.

Not All Streaming Speeds Are Equal

With Netflix and Amazon in just a fraction of Europe’s 186 million broadband homes, their growth potential would appear strong. Yet, Deloitte argues that broadband speeds fluctuate greatly depending in part on a household’s proximity to a telephone exchange. As a result, the report suggests a large percentage of Europe’s connected homes lack the bandwidth to adequately stream video.

“As a SVOD provider’s subscriber base grows, it may need to deploy a content distribution network (CDN) to maintain quality of service,” the report said. “It may [also] need to pay to set up direct connections to the Internet Service Providers (ISPs) networks — adding to the operational costs of running the service.”

Indeed, Netflix last year entered into peering agreements with several major ISPs in the U.S. — pacts now at the center of new net neutrality guidelines the Federal Communications Commission is expected to release in February.

Fandango Getting SVOD Channel on Hulu