You may select more than one category for a title on each form. For a new title, please submit the form and fill out a new entry. You may submit multiple titles using one form by attaching a file.

If you do not see the submit button above, please click here.

Definitions of each category:

Choice Theatrical Cut (Best Theatrical Title on Disc): A film that had a significant run in theaters, beyond festival or special exhibitions.

Best Direct-to-Video/Limited Release: Titles that did not have a theatrical release, and were instead debuted on video or were released on disc after a limited festival or promotional run.

Best Title From the Vault (Catalog Title): A title that has either been previously released on disc or that is not a recent theatrical, TV or DTV release that have been re-released with additional special features, such as special editions, director’s cuts, anniversary editions, etc.

Best Collection (Boxed Set/TV DVD): Releases with multiple films included in a boxed set. Or a TV series, season, miniseries or TV content released on DVD or Blu-ray. The set will be judged on both what's in it and how it is packaged.

Best Indie/Foreign Film: Independently produced or foreign titles with a domestic U.S. release, either theatrical or direct to video. Depending on submissions, this category may be split by budget level.

Best Packaging: Titles with particularly original packaging designs or those that include free items such as movie posters, buttons, t-shirts, etc.  Not for standard DVD or BD cases with nice artwork.

Best Box Art: A category for the artwork on the container.

Spookiest Kidvid: This category is for DVDs and Blu-rays aimed at children that may have a minor horror or Halloween theme or supernatural element.

Best Big Bad (Best Villain): These films focus on a memorable character or a well-designed creature. This category is only for titles not previously released on disc. Please do not submit characters that previously won this category for additional entries in the same franchise.

Best Scream Queen or King (Best Victim): These films contain a memorable character who serves as the opponent of the main villain. This category is only fr titles not previously released on disc. Please do not submit characters that previously won this category for additional entries in the same franchise.

Best Line: This category covers the best line of dialogue from a movie or TV show. Please specify the scene being submitted in the box provided. This category is only for titles not previously released on disc. Each scene counts as a single entry.

Best Kill: This category is for the best death scene. Please specify the scene being submitted in the box provided. This category is only for titles not previously released on disc. Each scene counts as a single entry.

A "Best of Show" title will be selected from among all eligible submissions. 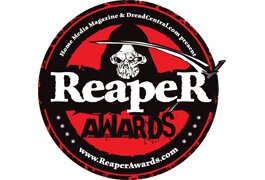