At the 'Midnight Movies' 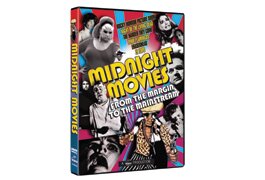 Midnight Movies: From the Margin to the Mainstream

It may be hard to picture, but there was a time before Quentin Tarantino, before 28 Days Later, before even Star Wars. In 1970, a film called El Topo screened at the now-defunct Elgin Theater in New York at midnight. Within weeks, the violent, surreal Western was selling out every night.

Thus began the “midnight movie” era, roughly between 1970 and 1977, in which hip audiences flocked to left-of-center movie houses at midnight to see things they couldn't in the multiplexes. Film scholar and documentary filmmaker Stuart Samuels focuses on six of the most notable of these films in his documentary Midnight Movies: From the Margin to the Mainstream, out on DVD Nov. 13 from Starz Home Entertainment at $19.97.

Samuels, a former professor at the University of Pennsylvania, was teaching pop culture and film history classes when the phenomenon popped up. He was introduced to the films by his students. Subsequently he wrote a book on the subject, Midnight Movies, published in 1983.

Twenty-five years later, Samuels' film on the subject includes interviews with the directors of the famed films, as well as industry players such as Ben Barenholtz, film exhibitor at the Elgin Theater; and Bob Shaye, co-CEO and co-chairman of New Line Cinema.

“The moviegoing experience, I think, has lost its ability to make people rethink ideas,” Samuels said. “It has just become more, ‘which one do I go see this weekend?' Midnight movies were symbolic of something other than the movie — a point of view, an attitude.”

“There were some movies that were successful at midnight … but what was unique about these particular six is that they generated a whole kind of commitment in terms of fans and followers,” Samuels said. “It wasn't the studios or the critics, it was the fans that discovered these movies themselves and made it part of their lifestyles and social environments.”

While not all midnight movies created the kind of fervor of films such as The Rocky Horror Picture Show, plenty garnered sizable cult followings. Here are a few more of Stuart Samuels' picks: