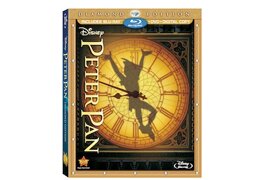 Disney, Animated, $39.99 BD/DVD, $44.99 BD/DVD/digital, ‘G.’
1953. The 1953 Disney version of Peter Pan was probably the studio’s first animated feature to hit baby boomers right between the eyes. Somewhat underrated at the time, Pan has weathered the years rather well and remains tight at 77 minutes.
Extras: New Blu-ray features, as opposed to those carried over from DVD predecessors, include a mild 41-minute documentary that interviews children of the famed “Nine Old Men” of Disney animators. In addition to storyboards of unrealized scenes (including an alternate finale), there’s also recognition of two proposed tunes that were deleted from the final print.
Read the Full Review

PBS, Documentary, $24.99 DVD, NR.
2013. Though Henry Ford was a mass of contradictions, this portrait of the automaker is admiring of him in many ways, though it in no way flinches from dealing with the old man’s dark side, which embraced active anti-Semitism.
Read the Full Review

Who Was That Lady?

Manufactured on demand via online retailers
Sony Pictures, Comedy, $20.95 DVD, NR.
Stars Tony Curtis, Dean Martin, Janet Leigh, James Whitmore.
1960. The other Janet Leigh movie of 1960 came out in the spring before Psycho, but it’s predominantly a boys-will-be-boys farce about a chemistry professor (Tony Curtis) whose TV-writer pal (Dean Martin) gets him out of a scrape.
Read the Full Review