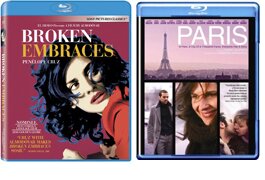 Street 3/16
Sony Pictures, Drama, B.O. $4.7 million, $28.96 DVD, $34.95 Blu-ray, ‘R’ for sexual content, language and some drug material.
Stars Penélope Cruz, Lluis Homar, Bianca Portillo.
2009. Taken as a brief for the rarified view that cinema is life’s highest calling, here’s one of the stronger arguments, given what happens to its blinded filmmaker protagonist, for the sanctity of the “director’s cut.” Simply calling it a reasonably good time falls a tad short because the portions that Penélope Cruz dominates are pretty potent.
Extras: A Variety Q&A with Cruz, a short film by director Pedro Almodóvar, deleted scenes and some red carpet material from last fall’s New York Film Festival.
Read the Full Review

Warner, Documentary, $19.98 DVD, NR.
2008. To paraphrase Calvin Coolidge, the business of this documentary is business, which is why the limited utilization of classic Warner Bros. scenes isn’t a problem here. This one is about blood kin. And, at least figuratively speaking, blood.
Read the Full Review

MPI, Drama, $19.98 DVD; $29.98 Blu-ray, ‘R’ for language and some sexual references. In French with English subtitles.
Stars Juliette Binoche, Romain Duris, Fabrice Luchini.
2009. The story undeniably takes place in one of the world’s photographic cities, and the DVD had a richer sound mix than I expected (which can pull you into the action in subliminal ways). Oscar winner Juliette Binoche is merely the best-known name in a large cast, deglamorized to play a no-frills social worker and single mom whose dancer brother (Romain Duris) needs a heart transplant.
Extras: Minor making-of and background featurettes.
Read the Full Review

PBS, Documentary, $24.99 DVD, Unrated
2009. Putting politics aside, you can’t find a more apt keyword for this 87-minute documentary to have in its title than “building.” So much of it deals with primitive highways, railroads, bridges and trestles — all constructed over land that tends to buckle some due to seasonal weather change.
Read the Full Review

Available Now via Amazon.com CreateSpace
Universal, Comedy, $19.98 DVD, NR.
Stars Shirley MacLaine, Michael Caine, Herbert Lom.
1966. Gambit was never more than agreeable fluff, but agreeable easily trumps disagreeable, right? The plot hinges on the physical resemblance of a Eurasian nightclub entertainer (Shirley MacLaine) to the dead wife of an Arab multimillionaire played by (longtime Inspector Clouseau nemesis) Herbert Lom. The Amazon print is a little grainier than I’d like, but I think this is due less to it being an on-demand DVD-R than the fact that Gambit was shot in cost-cutting Techniscope, whose inherent grain was better suited to Sergio Leone Westerns than escapist comedies. But this is still a handsome couple hours of entertainment, having earned Oscar nominations for costumes and art/set decoration and sound.
Read the Full Review