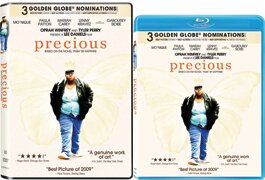 There are fewer things in the movies more exciting than successfully casting against type, and in the case of November’s sleeper hit — which really wasn’t, given three major table-setting awards at the previous January’s Sundance Festival — we saw this three times. Two involved personalities we know; the other involved a lead actress we hadn’t previously seen.

Yet just take a look at title lead Gabourey Sidibe being interviewed as part of the DVD/Blu-ray extras (if there can be a Sigourney, there can be a Gabourey). Even ignoring the makeup she sports, it’s hard to avoid the word “bubbly.” Which is not, and with good reason, what her Precious character is like either on screen or in Sapphire’s source novel Push — which has such a following that you can understand why the film risked carrying the most cumbersome under-title in recent memory so that no one in the marketing demographic would fail to grasp the movie’s origin.

Everything else here is more subtle, despite the inevitable high-test squalor of any story about a 450-pound Harlem teenager being twice impregnated by her own father and left HIV-positive (the story takes place in the 1980s). Director Lee Daniels takes some chances here with fantasy sequences that get into its central character’s dreams and secret longings, occasionally even eliciting an intended chuckle or two. This could have lobbed a grenade directly into the middle of his movie’s structure and tone — much as we’ve come to expect from the now biannual grab-bags served up by Tyler Perry (who signed on as executive producer here, along with Oprah Winfrey). But somehow, it all works and even becomes more than the sum of its parts.

Some of the other parts get back to the casting against type: comedian and TV personality Mo’nique as Precious’s mother — all vitriolic venom and from somewhere south of Hell; plus Mariah Carey as a counselor who’s in a position to have seen it all yet is obviously taken by the Precious plight. It’s a role Carey plays sans makeup – though director Lee Daniels says on the extras that he occasionally saw her trying to sneak an application — and one originally intended for Helen Mirren, who later noted that Carey pulled off (and with the added element of surprise) what Mirren-watchers would simply have expected as the norm. As Precious’ sympathetic teacher, Paula Patton is closer to conventional casting, though her tough-to-camouflage beauty was toned down as much as possible — leaving just enough to equate loveliness with learning (a smooth, intended touch by Daniels).

The extras contain several featurettes full of the usual back-patting, which, in this case, seems earned. You get a sense this one of those movies where a lot of accidents and chance occurrences worked out to the overall benefit (how often is the opposite true?). Mo’nique is moving and persuasive noting that it doesn’t always take a trained actress to understand the kind of roles she and Sidibe are playing here — and that if you’ve spent your entire life hearing yourself called “you fat {this}” or “you fat {that}” … well, you get the picture.