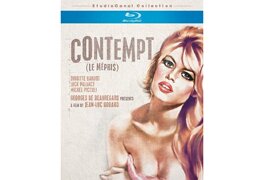 Judged alongside its concurrent, also color-rich Blu-ray releases of Akira Kurosawa’s Ran and the original Alec Guinness-Peter Sellers version of The Ladykillers, Studio Canal and distributor Lionsgate appear to be challenging industry-standard Criterion to a game of HORSE when it comes to making arthouse classics look like “opening night.” And from the evidence, they’re not being cheeky in doing so.

Whatever else you think of this unholy alliance between producer Joseph E. Levine and his hugely incompatible director Jean-Luc Godard, movie-savvy Contempt from 1963 is among the most gorgeous-looking European films of the era with its Mediterranean vistas, red convertibles with white-hot wax jobs and, of course, Brigitte Bardot’s bare behind (at the time, also industry-standard), over which Levine famously chastised Godard for not exploiting enough. And the presentation does full justice to a film that used to be seen almost exclusively in ratty revival house prints.

The battle between producers and directors is one of the movie’s themes, as is Homer’s Odyssey (the work we watch being filmed in twisted fashion) and whose narrative particulars get alluded to time and again. Another is the breakup of a marriage for reasons that remain unclear other than that Bardot’s character (married to playwright-turned-screenwriter Piccoli) has simply had it.

The vulgarian producer played by Jack Palance conforms to Godard’s real-life view of Levine: He does Homer “rewrites” and pushes for more nude scenes. Real-life pantheon director Fritz Lang (by then professionally unbankable by the money men Godard so loathed) plays the director here, an artist of integrity who wants to stick to the text. Interestingly (if not surprisingly) in Alberto Moravia’s source novel, it was the director who subverted Homer against a producer who didn’t.

Stately and unsexy, the whole endeavor is amusingly perverse — down to its double-edged title and the short black wig Godard makes the screen era’s No. 1 blonde-goddess (whose acting is very persuasive here) wear for much of the picture.

In terms of movie soul, Contempt remains cutting edge — starting with the prescient plugs it gives to other films (Rio Bravo, Vincente Minnelli’s Some Came Running) that were not so valued at the time. In fact, Michel Piccoli avoids removing his hat in the second half of the picture in homage to the “Bama” character Dean Martin played in the latter.

The disc is jammed with extras. There’s an intro by film professor/historian Colin MacCabe, which packs an amazing amount of historical info into five minutes; and scads of look-backs clocking in at various length — some done at the time, some more recent.