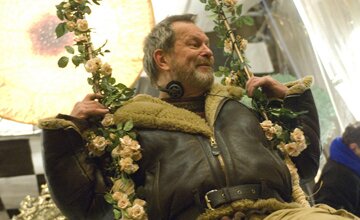 Terry Gilliam on the set

The Imaginarium of Doctor Parnassus is a delirious dream ride, with Terry Gilliam (Brazil, 12 Monkeys) at the helm. Gilliam spoke with me and other journalists about, among other things, where he comes up with his ideas ("little elves," he says), how he brings them to life without a mammoth budget and what he thinks about 3D.

“I don’t think technology changes or saves anything,” Gilliam said. “3D is interesting, but you’re going to need more money to make a film. And if you need more money to make your film, you’re going to be limiting what you can say and do because that’s just the way it works. The more money, the more you’re constricted in what you say. You’re not out there to disturb people when you’re playing with $200 million dollars, you’re there to reassure them, stroke them, ‘ahhh, come back to my world, it’s going to be like you’ve seen before.’”