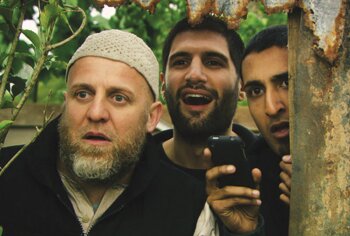 It might not seem there is much comedy to mine from Jihadist terrorist attacks. But director Chris Morris’ Four Lions, releasing March 8 from Magnolia Home Entertainment (DVD $26.98, Blu-ray $29.98), proves that even the direst of situations are ripe for satire.

“I wanted to find out a bit more about this subject, as it’s not adequately described in the average media discourse,” Morris said. “There were a bunch of Canadians who wanted to assassinate the Canadian Prime Minister and forgot who he was. There are fairly ridiculous examples of these guys in action.”

In Morris’ film, a group of hapless British Muslim extremists plot a terrorist attack at the London marathon. Far from the stone-faced caricatures you might see elsewhere, Morris’ group are seen as misguided souls who love gangsta rap and joking with one another. At one point, a member of the troupe makes videos of himself with his cell phone while at a terrorist training camp in Pakistan — possibly alerting the camp’s presence to U.S. drones.

“[Terrorist attacks] are to some degree or other amateur projects, relative to what they’re up against,” Morris said. “They are commissioned and put into action by people who are not really sophisticated operators or highly trained individuals.

“The more I looked, the more I found. I thought, as amazing as it is to me, maybe it will be amazing to someone else. And it happens to fit something I understand, a kind of comic universe. At that point, it was impossible not to do [this film].”

Morris said the DVD and Blu-ray contain deleted scenes that impeded the film’s pace, but that were funny enough to include on their own. Additionally, he said there would be some behind-the-scenes featurettes and a couple of mini documentaries on people who are similar to characters in the film, such as a Caucasian man who converted to the Muslim faith, and showing a slice of life from non-radical Muslims.

“There’s probably me answering endless questions about the film as well,” he added.

Morris is known for such British TV shows as the news-show-skewering “The Day Today” (think “The Onion’s” online news segments) and TV doc spoof “Brass Eye.” He said “Brass Eye” is available as a Region 0 import and both shows can be seen in bits on YouTube, but neither show has had an official U.S. DVD release.