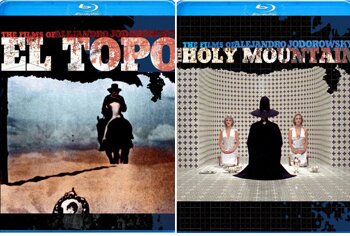 Yes! Anchor Bay Entertainment will upgrade a couple of the weirdest and most innovative films put to video to high-def when it releases director Alejandro Jodorowsky’s El Topo and The Holy Mountain on Blu-ray April 26 (prebook March 30) at $34.99.

El Topo helped launch the midnight movie phenomenon when the Mexican director’s film was released in 1969, screening seven nights a week at the Elgin Cinema in New York (see more about this in the film Midnight Movies). The cult classic is a pychedelic Western that defies description and conventional plot, as gunslinger El Topo treks across the desert to defeat his rivals. Follow-up The Holy Mountain was even further out there, as The Alchemist ascends the Holy Mountain to take the place of gods who secretly run the universe.