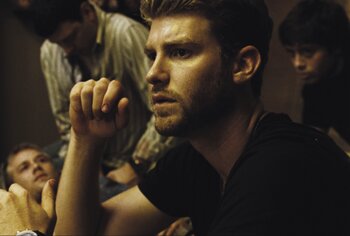 Jon Foster (Pandorum, also the brother of actor Ben Foster) stars in Brotherhood, about a fraternity hazing gone wrong — the brothers-to-be are coerced into fake robbing a convenience store, landing one of them in the hospital. Foster plays the ringleader, Frank.

Foster talked to IndieFile about the film and its release strategy.

IndieFile: How do you feel about the film coming out on VOD alongside theatrical?

IndieFile: SXSW and Sundance are embracing VOD and the Internet as a way to get smaller films out there. What do you think about using those means to deliver films alongside a smaller theatrical release?

Foster: Times are changing, and media’s changing along with it dramatically, to make entertainment more accessible to people so they don’t have to travel to go to them movie theater. It is an ordeal to go to the movies, as much as I love it. It’s much easier to pop on my Netflix and hang out comfortably. But I really think it’s important to have a group experience when being entertained. If you’re going to go to a standup comedy club, if you’re the only person in the audience, you might laugh, but it’s going to be a lot more fun if you’re with a bunch of people. So I think that’s the only downside to having access to this kind of media as opposed to going with a group. But I’m a Netflix junkie, so I can’t speak negatively about VOD or any of these new forms of sharing media that these new companies are doing right now.

IndieFile: Did you record anything special for the eventual DVD release of Brotherhood?

Foster: I guess they were released on the Internet recently, they were these little segments of these pledges being interviewed to see if they wanted to be in or not. I think those were released. We did some real hazing for the three days before the movie started, and they filmed that. But that film was destroyed by the actors; that won’t be released. To be entirely honest with you, everything we shot is in the movie. If someone was filming between scenes, it was unbeknownst to me. We may have done some sort of mock interview in the basement of the house one time; that might be on the DVD.

Foster: Oh my god, it was a party. People were literally standing up and screaming at the screen and cheering. It really was like a party. That was the most fun, being at SXSW, because the audience, it was so up their alley. I get booed a lot at the Q&As because they hate Frank so much, so that’s really fun for me to do. I love that festival; it’s one of my favorites.

IndieFile: Were you ever in a fraternity? Did you want to be?

Foster: When I was young, I think I wanted to be, but I didn’t go to college either. I’ve had experiences with friends who had really fond memories of their fraternities and have stayed at fraternities over the years. Some of them are great, and some of them are not great. It depends on the people in the establishment that make it good or bad.

IndieFile: This is a made-up story, but the ideas ring true. Could you relate to that desire to belong so much that people would be willing to do things like fake rob a convenience store?

Foster: Yeah, absolutely. A good example is in the hometown I grew up in Iowa, there’s this place called Dead Man’s Bridge, which sounds so stereotypical. It was really rickety and falling apart and you would dare each other to run across it. It was super dangerous, but you’d do it anyway. That was early hazing, a way to kind of put yourself in danger to create a bonding experience. In any group there’s always going to be something that takes place to make bonding happen. And it really depends on the people and the establishment that makes that bonding enjoyable or pleasant or not. I did plenty of silly, stupid things that I probably shouldn’t have growing up because the crowd I was running with was doing it.

IndieFile: I recently got to interview your brother, who was really great. Do you hope to ever star with him again?

Foster: Oh yeah. We just finished a movie together called Rampart about the Rampart police scandal in Los Angeles in the late ’90s. He played a crackhead, and I played a cop. That was really fun. We kind of made a pact to each other that we would keep on working in each other’s stuff from now on, so we’re always looking.