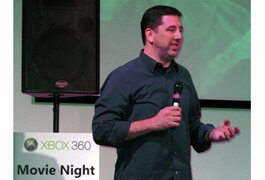 He’s just hoping they know Xbox 360 can do more.

“Everybody knows Xbox makes great games, but we offer HD movies, interactivity, downloads, you’ll be able to stream Netflix on it … you can use your Xbox as a media hub,” he said Oct. 22 at a promotional event for Xbox Live. “And now we’re going to start offering original entertainment.”

Nocas and Microsoft showed off a part of its line-up, previewing film pilots from David Slade (30 Days of Night) and Andrew Douglas (The Amityville Horror).

Next week John Clisham’s Janitor will be available for download, followed Nov. 19 by the launch of the “Horror Meets Comedy” series. The movies will be available at the same time Xbox Live users will be able to access content from Netflix, Disney, MGM, NBC Universal and Warner Bros. The launch will happen across 26 countries, Nocas said.

The moves reaffirm Microsoft’s commitment to streaming and downloading, instead of physical disc, Nocas said. He acknowledged that Microsoft — which supported high-def format war runner-up HD DVD — has no plans for Blu-ray Disc at this time. He said Xbox users can download movies in 720p and “we’ll provide a 1080p experience when it makes sense for our users.”

Director Lucky McKee (The Woods) said he jumped at the opportunity to do a short film for Xbox Live. “It’s just a purely fun exercise and it goes straight to people’s living rooms,” he said. “We’re giving you a chance to see something new…. We just need more people to download, download, download.”

Director James Gunn (Slither, Dawn of the Dead) said the multitiered release of the content gives it a chance to succeed. “This is so much more exciting to me than mainstream films,” he said.

Los Angeles resident Bernardo Digirolamo, 28, called streaming and download options like Xbox’s are “convenient, quick and easy,” but said people still want DVDs and Blu-ray too. “I like to have the actual item. Like The Godfather, I need to have those actual discs,” he said.

Jake Zim, COO of Safran Digital Group, said digital delivery of content is just a piece of the distribution pie. “It’s a big part of the future. It’s a fragmented release window right now, and the digital world flattens these windows,” he said. “The studios move very slowly. They’re responding to consumer demand, but not as fast as they could.”