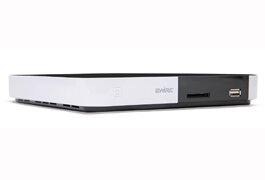 Escalating stakes in the burgeoning streaming market, Blockbuster Nov. 25 unveiled a broadband set-top box that allows users to watch video-on-demand (VOD) movies from the Internet on the television.

For a limited time, the MediaPoint player, manufactured by 2Wire, is available for free with the advance rental of 25 first-run movies, TV shows, foreign or classic films from Blockbuster On-Demand (previously Movielink) for $99.

Subsequent rentals are priced from $1.99 each, and usage of the device, which measures 8” x 8” x 1,” includes Wi-Fi wireless and Ethernet connections and supports high-definition video via HDMI cable, does not require a Blockbuster subscription.

“We are bringing Blockbuster and thousands of movies in our digital library straight to customers’ TVs,” said Jim Keyes, chairman and CEO of Blockbuster in a statement.

Mentioned earlier this month in Dallas-based Blockbuster’s third quarter financial call, the player is positioned as direct competition in the burgeoning slate of devices, including Netflix’s proprietary streaming device from Roku, launched in May.

The market for set-top devices, fueled by the conversion to digital broadcasts and IPTV, among other factors, is slated to peak at around 110 million unit shipments annually by 2012, according ABI Research.

He reiterated that Netflix has relationships with five set-top box manufacturers and is working on others.

“Our goal is to be ubiquitous and not just a Netflix box,” Swasey said. “We think the best thing for consumers is to have a choice.”

“This is a different [streaming] model,” Symonds said. “[Blockbuster is] going to learn this market better and this is the first step in that direction.”

He said launching the player in the midst of a severe economic downturn necessitated the introductory pricing plan.

“I think there is more risk at the higher end of the [consumer electronics] market than there is for a consumable impulse buy such as this,” Symonds said.

Independent analyst Rob Enderle with Enderle Group said the Blockbuster player, if marketed correctly, could be just what the market is looking for this Christmas.

“This isn’t a bad value and it provides a gift that falls within the $100 window for family purchases though, this year, that window may be much lower,” Enderle said. “It’s the products that cost in excess of $300 where we are likely to see the market pull back.”