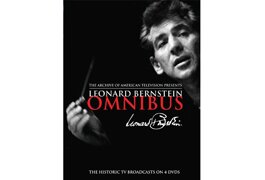 Via remarkably restored and remastered kinescopes by the Archive of American Television, Bernstein (quoting music critic John Rockwell in the set’s classy 24-page booklet) “enlightens the layman without offending the sophisticate” chatting about “blue notes,” “dissonance” and Beethoven outtakes (yes, he had them, and they exist).

Though “Omnibus” was TV’s No. 1 cultural show at the time (1954-58), it’s perhaps telling that CBS ran three of these segments, ABC two and NBC one. But their success led to CBS airing Bernstein’s famed Young People’s Concerts (available on nine DVDs from Kultur Films, $149.99).

Extras include a CBS broadcast of Handel’s Messiah from Christmas Day, 1955.