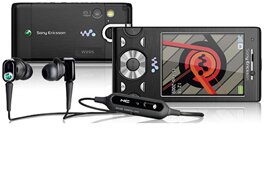 The interaction between disparate Sony brands, specifically entertainment and electronics, is a major corporate initiative disclosed by CEO Howard Stringer at CES in January.

Under its new “Entertainment Unlimited” consumer option unveiled this week at the Mobile World Congress in Barcelona, Spain, Sony Ericsson said movies, trailers and videos would be offered later this year on the PlayNow Plus platform, which currently caters primarily to music and is available in just eight countries, excluding the United States.

The service is intended for two new cell/camera phones, the W995 Walkman (8-megapixels) and Idou — the latter featuring a 12-megapixels and 3.5-touchscreen scratch-resistant display. It is slated to launch in the second half of the year.

Sony said it has sold more than 100 million video-enabled Walkman phones since 2005.

“Many of the strategic initiatives we've announced in the past year have laid the internal framework to launch this new consumer proposition to the market and [we are] now ready to drive the next wave of market development with Entertainment Unlimited,” said Dick Komiyama, president, Sony Ericsson, in a statement.

Specific titles and pricing were not disclosed.