We Live in Public (DVD Review) 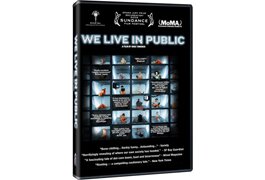 Josh Harris sent best wishes to his mother by video when she was dying (he wouldn’t see her). His one girlfriend bolted when she tired of having their every move (read: sex and bowel movements) recorded for mass viewing consumption on the Internet — for a viewing demographic that one has to assume was even more specialized than the old “Bowling for Dollars” fan base.

Yet, Harris was a visionary of sorts, despite wading even further into the deep end — as in too frequently donning clown makeup to “become” a fantasy character he modeled on actress Natalie Schafer’s portrayal of society snob Lovey Howell on “Gilligan’s Island” (a show on which he obsessed). For one thing, he founded the first Internet television station (Pseudo.com), cashing out before the ’90s dot.com crash after garnering so much notoriety (a “60 Minutes” profile for starters) that it’s surprising how obscure he is today. He then proceeded to blow his bounty in ways that, if nothing else, merit as many millions in style points.

First, just as the new millennium approached, he found a hundred people willing to live in a bunker of crawl-space “pods” underneath Manhattan. With video cameras photographing everything everywhere for constant monitor display, the operation had all the free food and ammo (for its recreational firing range) you could want — as long as you played by what increasingly came to look like a Jim Jones-Jonestown set of rules.

The object of Harris’ experiment was to see if the privacy-deprived inhabitants would go bonkers — and many did after only 30 days, at which point the un-amused Giuliani Administration (all those shooting guns under the city) busted the operation on Jan. 1, 2000. Harris had told the volunteers that food and amenities would be gratis, but that he would own the footage forever. A lot of it is included here, and it really is a peak into a unique civilization.

The next stop was the follow-up experiment with his girlfriend — photographing their day-to-day life for computer addicts to view and comment upon (look, they’re doing dishes). The number of viewers predictably dwindled, those still watching took the girlfriend’s side when they squabbled, and pretty soon his most avid audience was creditors. Which explains as much as anything why director Ondi Timoner’s Sundance Festival Grand Jury Prize winner (following a previous one for 2004’s DiG!) concludes with Harris in Ethiopia doing one of the last things you’d expect.

Though his accomplishments never matched his own inflated view of them, Harris’s warped mindset can’t be totally discounted, which is what gives this hard-to-shake yarn its tension. The flaw with his pioneer Internet-TV brainstorm was merely limitations in bandwidth at the time.

And what about his early suspicions that people would sacrifice their personal space, at least at first, if it could turn them into media stars (even marginal ones)? Well, think of him the next time you’re on Facebook, and some friend of a friend you don’t even know is telling the world that he’s about to go trim his nose hairs or to the 7-Eleven to replenish his beef jerky.

The DVD extras include behind-the-scenes backgrounders, with Timoner relating her own interesting story as a onetime hungry kid with a video camera.