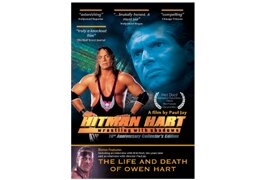 Return of the Hitman

It’s perfect timing for the 10th anniversary DVD release of director Paul Jay’s enlightening Hitman Hart: Wrestling With Shadows (Channel Sources, $19.99), which chronicles Hart’s controversial exit from the WWE in 1997 as a result of the infamous Montreal Screwjob.

The DVD includes new interviews with Hart as well as The Life and Death of Owen Hart, a poignant portrait of the Hitman’s brother who was killed during a WWE show in 1999.