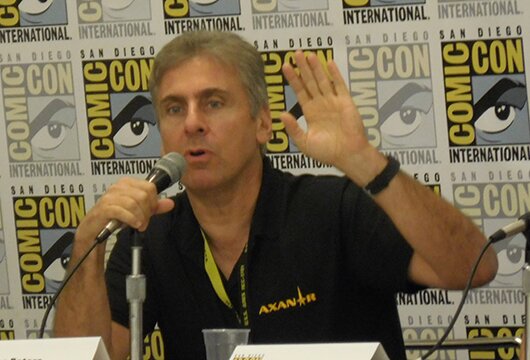 SAN DIEGO — In an era of crowd-funding, San Diego Comic-Con International has proved to be a great place for passionate independent filmmakers to appeal directly to their potential audience.

It’s independent studios and independent projects that are actually kind of thriving right now,” said Bill Hunt of TheDigitalBits.com. “The costs of production have come down to the point where it’s feasible to make great product and release it yourself on Blu-ray.”

One such project that was released on Blu-ray just in time for Comic-Con is the documentary The Death of ‘Superman Lives’; What Happened?, which delves into the preparations and ultimate cancelation of a Tim Burton-directed “Superman” film in the late-1990s that would have starred Nicolas Cage as the Man of Steel.

“I’m very proud of the film that we made because it not only covers just the idea of what Superman Lives would have been, it covers the process of what it takes to make a Hollywood picture,” said director Jon Schnepp. “And how anything you actually see when you’re in a movie theater is almost by chance that you actually got to see it because there are so many things that are in the way.”

Schnepp used Kickstarter to raise enough money to finish the film, a process that turned out to be much more involved than originally conceived.

“It’s a litmus test when you go on Kickstarter,” Schnepp said. “If people want to see it, they’re going to fund it. If they don’t, they won’t. And that’s different than when you try to produce something yourself and go to a studio and they say no. So I had it in my gut like, ‘I think it’s a good idea, I’m going to go to the people.’ The crowd spoke, we raised the money, we went broke a couple times trying to make the film. It took almost three times as long as I thought it would take. But here we are, we released the film on Blu-ray, on DVD, and on digital download, and the response has been fantastic.”

For his part, Hunt is helping produce Axanar, a professional-quality, full length independent “Star Trek” film about a war between the Federation and the Klingons, which stars many veterans of the official “Star Trek” series, some of whom reprise their old roles.

“We are making ‘Star Trek’ that we all want to see,” said Alec Peters, who stars and serves as executive producer. “I think it’s a groundbreaking look at ‘Star Trek.’ A fresh take.”

Peters July 9 showed off the new Blu-ray of Prelude to Axanar, a 21-minute short film funded through Kickstarter to introduce the concept of the full film.

Since Axanar is not sanctioned by CBS, the official “Trek” studio, the only way to obtain the Blu-ray is to donate to the making of Axanar. The Blu-ray was one of the perks of the original crowd-funding campaign, but new fans can obtain a copy with an IndieGoGo donation at SaveTheFederation.com.

Prelude to Axanar, which screened at last year’s Comic-Con, can be seen online at StarTrekAxanar.com.

The Blu-ray Includes several behind-the-scenes featurettes, as well as the first scene from Axanar, which will be released next year. Peters said plans are underway for a five-disc steelbook set of the finished Axanar film that includes a bonus disc and two soundtrack albums.