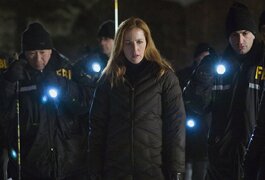 The X-Files: I Want to Believe

“X-Files” producer and co-writer Frank Spotnitz is still planning the Blu-ray Disc release of the latest film, The X-Files: I Want to Believe. The film hit theaters July 25, but Spotnitz and director Chris Carter are still exploring all the capabilities of the new format.

“I had no idea what Blu-ray could do,” Spotnitz said. “I thought it was just a higher-definition picture, but it's much more than that. We are trying to think of every possible way to exploit the Blu-ray medium. Those discussions are still continuing. We've been working on the Blu-ray and the DVD release for months already. It's going to be packed with a lot of bonus features.”

“I'm sure they'll want to announce what is on them specifically, but there will be a gag reel; a making of, as there always are; multiple commentaries; both audio and video that you can access in a unique way because its Blu-ray,” Spotnitz said. “We are going to take advantage of the online feature in a way we haven't determined yet.”

“There is an extended version of the movie, then there are deleted scenes,” Spotnitz said. “I'm going to get it wrong if I try to tell you which scenes are going into which. There will be a lot of extras.”

Whichever scenes end up going in an alternate version of the film would only make subtle differences.

“It's not significantly longer,” he said. “It's only a few minutes longer, but it's more explicit, and a little more emotional, believe it or not.”