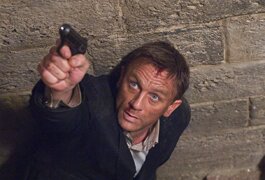 The first wave of James Bond Blu-ray Discs from MGM and 20th Century Fox Home Entertainment, due Oct. 21 (prebook Sept. 24), will include a coupon for a theatrical ticket to see the upcoming Bond film Quantum of Solace.

Two $89.98 volumes of three films each are planned. The first volume includes Dr. No, Die Another Day and Live and Let Die; the second includes For Your Eyes Only, From Russia With Love and Thunderball.

Each boxed set will include two movie-cash vouchers. The films also will be available individually, each with a ticket, for $34.98 apiece.