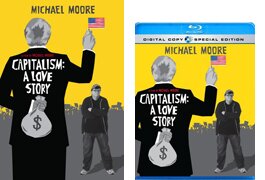 Not that the incident at Columbine, Colo., wasn’t a huge subject, nor the invasion of Iraq — but taking down something as mighty and ingrained as capitalism seems like a mighty tall order for a filmmaker as puckish as Michael Moore. This said, Moore’s routine seems relatively toned down this time out, just as it did in 2008’s health care treatise Sicko. And as always, Moore remains an auteur (when relatively few have been homegrown in recent years) whose rants always reward to varying degrees.

In one way, what has happened to capitalist society over the past quarter-century can be compared to what has happened to the quality of Hollywood movies over the same period: the middle class — like the middle range of releases that used to keep the industry going — has suffered a whopping collapse. Moore is livid about this (the first, not the second), and more than half the time in his latest polemic, it’s difficult to not share his rage.

After establishing scenes of already marginalized citizens being thrown out of their modest homes, we meet a Florida broker who probably has to be credited for having the seeds to appear on camera. As proprietor of a company unambiguously named Condo Vultures, he buys foreclosed properties at subterranean prices and reaps huge profits on the backs of the former owners. You can call it the American way, but in a just society, his own carcass would be ripe for picking by you-know-what.

Moore also has a field day talking of airline pilots whose annual salary amounts to the cost of not many intercontinental tickets; what a warm feeling it is to fly over the Grand Canyon and worry about whether your pilot is able to make his car payment. And, then there are corporations who take out insurance policies on their employees (hint: it isn’t their family members who get the money).

But the swath cut here is wide, even for Moore, and when he’s denouncing capitalism wholesale — as opposed to its egregious abuses — one senses that the subject is likely beyond the scope of the kind of movies he usually makes. Members of the middle class, whose pensions and 401Ks took hits, grouse about fat-cats — many of whose portfolios were cratered as well amid the recent economic armageddon.

Yet, people like the ones being tossed from their homes in the film’s opening scenes likely envision 401Ks and pensions as concepts direct from Neptune. This is a topic that deserves the full treatment Spike Lee gave Hurricane Katrina in 2006’s incomparable epic When the Levees Broke. At least.

In fairness, Moore often is reflective here, though longtime fans of his muckraking prowess will enjoy his journey down to Wall Street, where he wraps yellow and black police tape around one of the buildings and tries to find just one person who can explain derivatives.

As per usual for a Moore documentary, the DVD/Blu-ray releases come with a lot of extra featurettes. The most imposing is probably the interview with New York Times Pulitzer winner Chris Hedges, who has many sobering things to say about the subject at hand (including capitalism’s drain on the environment). One savvy inclusion is Jimmy Carter’s once maligned 1979 “malaise” speech, which has weathered the years better than many thought it ever would. Unfortunately.